Elena Reviews: The Kiss of Deception {The Remnant Chronicles #1} By Mary E. Pearson

Title: The Kiss of Deception 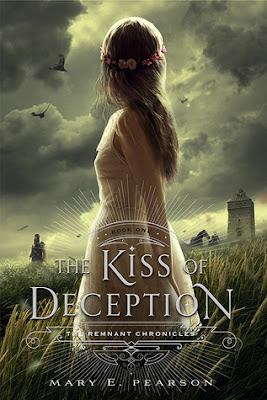 A princess must find her place in a reborn world.


She flees on her wedding day.

She steals ancient documents from the Chancellor's secret collection.

She is pursued by bounty hunters sent by her own father.

She is Princess Lia, seventeen, First Daughter of the House of Morrighan.

The Kingdom of Morrighan is steeped in tradition and the stories of a bygone world, but some traditions Lia can't abide. Like having to marry someone she's never met to secure a political alliance.

Fed up and ready for a new life, Lia flees to a distant village on the morning of her wedding. She settles in among the common folk, intrigued when two mysterious and handsome strangers arrive—and unaware that one is the jilted prince and the other an assassin sent to kill her. Deceptions swirl and Lia finds herself on the brink of unlocking perilous secrets—secrets that may unravel her world—even as she feels herself falling in love.

The Kiss of Deception has been sitting on my shelves since it came out and I have no idea why I'd never felt the desperate need to read it, until now! Maybe it was because I was afraid of not enjoying it as much as I would've liked to or just because I felt really intimidated by it, which can be said for a lot of books still sitting unread on my shelves. But, we're not here to talk about my failed attempts at being a bookworm so, let's move on to the point of this review!

This fascinating novel follows Princess Lia, who flees on her wedding day because she doesn't want to give up her future by marrying someone she's ever met and succumb to the wishes of others by doing so. She finds refuge in a distant village and leaves behind a trail of confusion for those who will undoubtedly try to locate her. With her best friend's help, she becomes one of the villagers and even gets a job waiting tables. But, everything is not as easy as it seems at the beginning. Two people are searching for her, a Prince and an assassin. But when they do find her, things don't go as planned. On the contrary, they become more complicated than ever and Lia has to decide to whom her allegiance lies, herself or her Kingdom?

My rating isn't a solid four stars but, that's what it leaned towards so, it'd be unfair to reduce it to three. Now that we've cleared that up, let's move on to what I liked about this book and what I sort of didn't. First of all, the writing was amazing! Mary E. Pearson's detailed descriptions made it feel like I was living in the same world as the characters and even though I'm not the biggest fan of multiple perspectives, it definitely made up for it. You could definitely tell the characters apart by the style of writing used for each of them and they all had their own voice throughout the novel! I wasn't sure how to feel about Lia at the beginning because on the one hand, her choice was quite selfish but, on the other hand, I could definitely sympathize with her and understand her need to get away from everyone who tried to control her life! I ended up really connecting with her and where she was coming from was became so much clearer as the story progressed. Even though she was a Princess, her life wasn't perfect and a lot of things were missing, things that she found in the simple way of life she pursued by choosing to live among common people.

Second of all, it took me a while to figure out who was the Prince and who was the Assassin. They were introduced at the same time and their narratives weren't clear as to what each of them looked like. That was such a clever move on the author's part because it made everything even more fascinating and the story so much more intriguing than it would've been if she'd just revealed their true identities from the beginning. I'm obviously not going to get into them too much because I want you guys to try and figure it out yourselves but, I absolutely loved both of them! They were not what I was expecting and they took me completely by surprise, which is quite impressive because it doesn't happen very often! I feel like their development wasn't as major in a way as Lia's because she truly grew as a person but, that does not take anything away from the fact that they were both well written and three dimensional!

Moving on to the elephant in the room, the alleged love triangle! I've talked about how much I despise this particular trope in the past and I usually avoid books that use it as their premise but, believe it or not, this was completely different! It wasn't as ''in your face'' and I feel like it was handled almost perfectly! It didn't overshadow everything else that was going on and I was actually not really bothered by it. It wasn't forced on us and things felt completely natural, which means that there was a natural flow that made everything that took place feel normal and like it was supposed to happen! Plus, the ''chosen one'' is pretty obvious from the beginning, even though there seem to be some mixed feelings throughout the story!

Moving on to the pace of the book itself, which I had some trouble with. It got very slow and repetitive at times, which definitely frustrated me because it happened a bit abruptly. Also, the ending was a bit predictable and even though a lot of things happened, there weren't enough twists to keep my adventurous soul satisfied. It felt as if the climax got one step closer with each chapter that I read but, it just never reached me! I was in this weird state of being in between nothing and everything but, it kept evading my grasp. Maybe that was the author's intention because the ending did blow my mind with how unexpected it was but, this book would've reached perfection if it weren't quite so uneventful in terms of real and raw action. Everything else kept the story going but, the brief action scenes scattered throughout the novel weren't enough for me, personally!

Overall, I really really enjoyed The Kiss of Deception because it was such an easy read and quick read! The writing was probably its strongest point and the love triangle didn't overwhelm me because of how well thought out it was. I would definitely recommend this one to Fantasy lovers but, don't expect much intensity from it. It's one the light side of Fantasy and I feel like we'll get to see its dark side on the next two books! Really can't wait for it!

Do you guys enjoy love triangles? Make sure to let me know if you've already read The Kiss of Deception and whether you enjoyed it or not in the comments below!