Hello guys and welcome to the official Blog Tour for Dive Smack, a Young Adult, Contemporary that will fascinate and intrigue you, from the moment you start reading until its last page! Make sure to scroll down and read my thoughts on it! Also, don't forget to enter the US Giveaway at the end of this post! 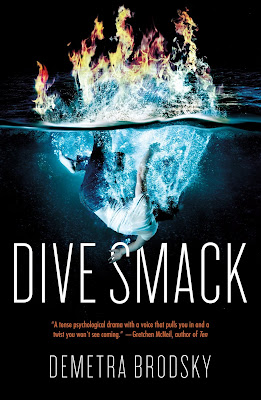 Theo Mackey only remembers one thing for certain about the fire that destroyed his home: he lit the match.

Sure, it was an accident. But the blaze killed his mom and set his dad on a path to self-destruction. Everything else about that fateful night is full of gaping holes in Theo’s mind, for good reason. Maybe it’s better that way. As captain of the Ellis Hollow Diving Team, with straight A's and solid friends, he's only one semester away from securing a scholarship, and leaving his past behind.

But when a family history project gets assigned at school, new memories come rushing to the surface, memories that make him question what he really knows about his family, the night of the fire, and if he can trust anyone—including himself.

Dive Smack was one of my most anticipated releases and literally jumped at the opportunity to read and review it, because it sounded like something I'd never read about before. The premise is extremely fascinating and even though it start off a bit slower than I would've liked, it picked up after the first couple of chapters and kept me on the edge throughout it! It was a truly enjoyable read, which gave a different and intriguing spin on the Contemporary Genre! It also spiced things up with the Mystery aspect and how suspenseful it made the story itself!

I absolutely loved the fact that the novel was told in Theo's POV. I haven't come across a lot of Contemporaries that are told in the male character's perspective exclusively so, this was definitely a breath of fresh air for me. It was more unique because of the fact that, I don't encounter it as often as I'd like it books so, it made the experience of reading Dive Smack even better! Right from the beginning of the novel, his voice was clear and determined, making him sound more mature than his age. The mystery is kind of introduced when one of his class assignments about his family tree, sparks questions he has no answers for and thus begins the journey to discovering more about himself and unraveling the truth of his past. His character was quite believable and more than easy to relate to, since he's a teenager that's going through some very dark times, perfectly described by the author throughout the novel and becoming even more vivid as the story progresses! He's also very likable from the beginning of the book and his character development is more than well thought out and executed. His friendship with Chip was another thing I immensely enjoyed while reading the book, since having supportive friends that stay with you through thick and thin is extremely important and very hard to find nowadays. Chip's loyalty was hard to ignore and his believe in Theo never faltered, a fact that made him and the bond they shared even more authentic!

Moving on to the love interest, Iris. She was phenomenal! The combination of tattooed nerd girl that's a complete bad ass was quite the surprise everyone! Color me impressed! She was basically her own person and I truly admired her for it! She has her secrets too, a fact that makes her as fascinating as our main character but, never lets her demons get in the way of her standing by Theo and grounding him when he needed it the most! She was a truly inspiring character that bloomed in front of my eyes and made things so much more interesting and exciting to read!

Another fact I personally greatly appreciated, is how the romance never overshadowed the rest of the story. I feel like many authors that decide to include the mystery aspect in YA Contemporaries to be specific, kind of make it more about the Romance than the Mystery itself because they get carried away but thankfully, that was not the case with Dive Smack. Even though the chemistry between Theo and Iris was there, it didn't really take anything away from everything that was going on in the novel. On the contrary, it added more to it by keeping it realistic and relatable!

Moreover, the writing was great for a debut novel and I really loved how the author decided to built such a well thought out plot on top of such an interesting premise! It does have its twists and turns, which I wasn't really expecting, something that made it even more suspenseful and kept me on the edge of my seat. As I've already mentioned at the beginning of this review, the only reason I didn't give Dive Smack a five star rating was because of how slow paced it was at the beginning. What followed after that definitely made up for it though so, I don't really have anything else to say about it! Overall, this was such a fun read that definitely picked up and became more interesting as the story progressed! It was a page turner for sure and it's more than worth reading, if you enjoy YA Contemporaries with a Mystery twist!

Demetra Brodsky is an award-winning graphic designer & art director turned writer. She has a B.F.A from the Massachusetts College of Art and Design and lives in Southern California with her family of four and two lovable rescue dogs. Dive Smack, her debut novel, is dedicated to Pumpkin, the monarch butterfly she once saved from the brink of death. Once you read the book, you’ll understand why. She is a first generation Greek-American and a member of International Thriller Writers. Dive Smack is a 2018 Junior Library Guild Selection. 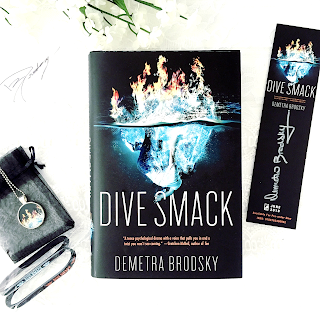 a Rafflecopter giveaway
Posted by Book Lady's Reviews at 22:01