Hello guys and welcome to the official Blot Tour for Always Forever May, a YA Contemporary that deals with a very sensitive topic the world needs to hear and read about! Make sure to mark tour calendars for its release and don't forget to enter the Giveaway at the end of this post! Also, you can discover more posts by other amazing bloggers by clicking on the banner and visiting the Tour Page! 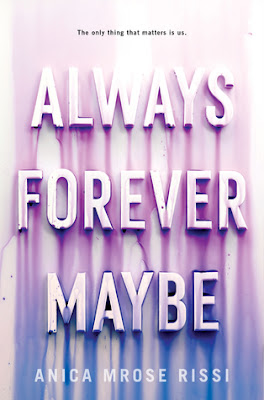 When Betts meets Aiden at the candy store where she works, their connection is like a sugar rush to the heart. Even before they share a first kiss, Betts already knows the two of them are destined to become an us.

Betts has a bruised, cautious history with love, but she feels safe and empowered in Aiden's arms. He trusts her with the darkness in his troubled past, and his devotion opens up a new future for Betts just as everything else in her world is changing. With graduation inching closer, Betts and her best friend, Jo, have been sliding slowly apart, and that fissure is blown wide open by Aiden.

Betts has only ever kept one secret from Jo, but suddenly there's a long list of things she won't tell her, things Jo wouldn't understand. Because Jo doesn't see how good Aiden is for Betts. She finds him needy. Possessive. Controlling.

She's wrong. With a love like this, nothing else matters.

*I received this book from the publishers in exchange for an honest review. All thoughts and opinions are my own!*

Always Forever Maybe was one of my most anticipated reads for this year and I jumped at the chance to read and review it for a Blog Tour! It follows an abusive relationship that doesn't start out as such and explores the effects it has on the victim - in this case, Betts - and those who deeply care about her. The beginning of the book hints at something that's not right with Betts but, it's not revealed right away. She takes us back in time in this sort of flashback that starts to slowly unravel her secrets and what really happened with Aiden. How they met, how they fell in love and how their relationship basically spiraled out of control.

I'm not going to get into any more details where the plot is concerned because I feel like this is one of those books you need to read in order to feel the impact of but, I'm going to talk about what I enjoyed and what I didn't about it! Obviously, the story itself deals with a very sensitive subject that can be a hit or miss, depending on how the author handles it. It this case, I really felt like it was well written and got the message across, which is very important when it comes to books of this nature! The author did a pretty good job at highlighting the emotional and domestic abuse that prevailed in Bett and Aiden's relationship without overstepping any boundaries. It was both realistic and relatable, written in a very raw and poignant way that definitely made an impression on me, both as a reader and an actual human being!

Maybe Betts would've had more experience if she were older and would've been able to recognize the signs a bit better but still, it can happen to anyone because truth be told, we're more naive than we think sometimes. We have this distorted notion that love means accepting everything our ''other half'' says or does but, it doesn't work that way. We're trying so hard to create this ideal way of loving someone without realizing that it's just an illusion and the importance of it all lies in how much truth that love can handle without being overwhelmed by it. I'm getting a bit sentimental here, I know but, this is a very important topic that people need to talk about and stop brushing off or completely ignoring! I know that talking and writing about difficult topics that are considered to be a bit taboo in literature and life in general is not the easiest thing but, that is the main reason I was so interested in reading Always Forever Maybe and why I immensely appreciated its existence before doing so!

There were so many warning signs in Aiden's behavior and reading about them but not being able to do anything in order to prevent them from taking their hold on Betts was quite frustrating. Being a reader is more difficult than normal people realize sometimes, something that was very prominent in this particular novel, more so than in others I've read recently. I just sat there and kept turning its pages while dying on the inside because of what Betts was going through! I felt so many emotions while reading it because I simply could not change how it progressed and had to suffer along with the main heroine and everything an abusive asshole put her through. I usually try to keep emotion out of my reviews because that's what makes them more personal but, if you think about it, they are personal. Reading is supposed to make you feel things - positive or negative - and sharing them with the world is the least you can do for yourself and those who are interested in reading them as well, which is the point of running a blog or writing reviews in general!

Betts came off as being super sweet and dependable, throughout the novel. She obviously had no previous experience on relationships and the excitement of first love made her unaware of the dangers that lurked under its surface. She didn't know what it was supposed to be like and that is why she was more susceptible to denying its abusive nature. Aiden was a master at manipulation and she was easily affected by it, without realizing what it truly meant for her and her relationships with others. Her strong friendship with Jo was basically the thing that stood out the most in this story and the importance of it did not go unnoticed! Having supportive friends is the key to happiness and Jo was definitely the best of the bunch when it came to it! She stuck by Betts until the end, even when she did everything in her power to push her away! Eric was also a nice addition to the story. You could tell that there was a thing brewing between them but, I really enjoyed the fact that it took a backseat to everything else that was going on in the novel! Her parents were a completely different story, which becomes pretty apparent as soon as they're introduced! They're basically assholes and this is where the usual shitty and controlling parents trope comes in!

The thing that bugged me the most was the ending. I found it to be very rushed and it was definitely uncalled for, considering how well written the beginning of the book was. It was very quick and did not cover the basics of an ending, if that makes any sense. It didn't wrap things up for me and it felt like it was written in a haste, just for the heck of it. There could've been a more substantial build up to it that would've completed the characters' development in a way, mainly because they didn't reach their full potential, in my opinion! I'm also not very sure whether I really liked how the relationship ended because of an outside factor that kind of forced it to. I know that sounds complicated but, I'm not going to delve deeper into this particular statement because I don't want to spoil anything but, I feel like if it weren't for what happened that was not character driven in any way, Betts might've still been with Aiden. I can understand his troubles and the fact that he went through some pretty difficult times but, taking that out on her by being an abusive monster was not okay! We all deal with stuff but, violence is not a way to get over it!

Overall, I really enjoyed Always Forever Maybe because of how well it dealt with a very sensitive subject and made sure that readers understood how important speaking about it is! It can eat at your soul from the inside and you'll just keep denying it because that's how it's supposed to feel! Even though I wasn't a big fan of the ending and how underdeveloped it felt, I was more than appreciative of the message it sent across and how realistic it kept things throughout it!

Do you guys plan on reading Always Forever Maybe? Make sure to let me know in the comments below!

Anica Mrose Rissi grew up on an island off the coast of Maine. After college, she moved to New York City, where she worked as a cheesemonger and book editor. She now writes, fiddles in the electro-country band Owen Lake and the Tragic Loves, and walks with her dog, Arugula, near their home in Princeton, New Jersey. Anica is the author of several books for younger readers, and her essays have been published by The Writer and the New York Times. Always Forever Maybe is her YA debut.
{Website | Goodreads | Facebook | Twitter}