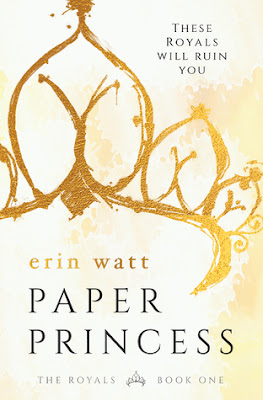 From strip clubs and truck stops to southern coast mansions and prep schools, one girl tries to stay true to herself.

These Royals will ruin you…

Ella Harper is a survivor—a pragmatic optimist. She’s spent her whole life moving from town to town with her flighty mother, struggling to make ends meet and believing that someday she’ll climb out of the gutter. After her mother’s death, Ella is truly alone.

Until Callum Royal appears, plucking Ella out of poverty and tossing her into his posh mansion among his five sons who all hate her. Each Royal boy is more magnetic than the last, but none as captivating as Reed Royal, the boy who is determined to send her back to the slums she came from.

Reed doesn’t want her. He says she doesn’t belong with the Royals.

Wealth. Excess. Deception. It’s like nothing Ella has ever experienced, and if she’s going to survive her time in the Royal palace, she’ll need to learn to issue her own Royal decrees.

I want to start this review by saying that, Paper Princess was one of my most anticipated reads and it let me down big time! I first saw the book on Instagram and was really intrigued by the title, thinking at the time that it would be a Fantasy novel. I was not expecting a Contemporary but, the synopsis still sounded interesting so, I decided to go ahead and give it a try! I'm not going to get into the plot itself too much because it was basically nonexistent and this review might include minor spoilers about some of the characters but, nothing major. Because truthfully, there was nothing unpredictable or exciting about this story and I'm going to explain why as best as I can.

This is obviously going to be a negative review, which I haven't written in a while so, I'm very sorry if it comes across as too out of place! I tried to put my thoughts in order as best as I could and that's why I wanted to wait a couple of days after reading the book to write my review! The only positive I have to say about Paper Princess is that the beginning was very promising! The first couple of chapters did a great job of introducing Ella and explaining her unfortunate background. She came across as being very mature and determined to create a future for herself, even if it meant reaching rock bottom by stripping in order to make ends meet. She also seems to be very responsible and ready to face anything life throws at her with courage. Everything changes when she meets the Royals. Her mother's death left her completely alone in the world and when Callum Royal appears out of nowhere to announce that he's her new guardian, she's uprooted from a life of poverty and thrust into a world of comfort and luxury, something she's never had before. Problem is, Callum's five sons aren't really happy with her arrival and will do anything they can to send her back where she came from.

So far so good, right? No, not at all. The story is more than problematic and the males that make up the majority of it were not in the least likable or well written. Everything that could have gone wrong went wrong throughout the novel and let's discuss the big question! Why? Before I start ranting about the problematic aspects of Paper Princes, I just want to mention that all books are problematic, more or less. And all of us have different boundaries when it comes to certain topics, which is completely acceptable! But, there are books whose problems don't overshadow everything else and books that make you want to scream out of frustration because of them! Guess which category this one falls into!

First of all, the whole male dominance trope was so apparent and uncalled for that it made me want to tear my eyes out in order to stop being subjected to the torture of reading it. It wasn't well executed and combined with the sexism that prevailed throughout the book, it basically ruined everything for me! It was obviously not called out and the same goes for the sexual harassment that took place at the beginning of the novel, because the Royal brothers found it so damn funny and appropriate. And of course, Ella deserved it because she was making their lives miserable with her presence. She didn't acknowledge it at all and it was brushed off as a spoiled kid's reaction to a ''difficult time''. Seriously? Who are you trying to fool here? Or is romanticizing abuse the new trend for YA Romances? Is abusing someone with words and basically telling everyone to hate them for no particular reason romantic nowadays? Or should we all strive to be that way in order to find true love? There was also an almost rape scene where Ella was basically drugged by someone she was warned not to go out with and this was also brushed off like it was nobody's business. It was more than insensitive and unnecessary.

Moving on to how the Royal brothers behave towards their father. He wasn't the brightest of the bunch but, their disrespect and plain disregard for him was disgusting. They blame him for their mother's suicide which left them traumatized so, it's totally acceptable for them to behave like assholes by treating people who aren't filthy rich and spoiled like trash! Truth be told, their father isn't much better. He doesn't respect Ella or her wishes, he basically orders her around all the time and has sex with his girlfriend in front of his kids. Way to go!

I can understand the whole rich bad boy falling in love with the innocent naive girl trope and I find it entertaining in most cases but, it was not executed right. Not at all! Reed is abusive and disrespectful, his twin brothers go around having sex and actually deceiving girls by switching identities, Easton drinks and gambles to deal with his problems and the oldest son whose name I cannot remember because he was so memorable - insert sarcasm - has sex with his father's girlfriend and her evil friend who's basically Ella's evil stepmother because they're apparently blackmailing him! That was a lot to take in, wasn't it? Oh, let's not forget the fact that Callum is basically blackmailing Ella into staying with them as well, by using money as an excuse for her to stay!

There are no equal or even realistic representations of basically anything in this book and feminism flew out the window as soon as it was published. Ella is portrayed as this unfortunate soul with no character whatsoever, who does everything other people tell her because apparently, she has no free will. She has no personality, even though she seemed to be very mature and responsible at the beginning of the book and settles for Reed, who should've repulsed her because of everything he put her through. Men are also portrayed as dominant pricks who don't respect women and only use them for their own pleasure, without even giving a fuck about their feelings or personalities! Everyone is also so good looking it's ridiculous and they always get what they want as a result of it. After the Royal brothers basically defame Ella with their unacceptable behavior, they admit to being wrong about her without even apologizing and keep on spewing out insults that are obviously more than offensive! What's the excuse? They're drunk of course so, it's totally okay!

Last aspect I want to touch on is how unedited this book seemed to be! I'm a grammar freak and there were a lot of mistakes here, which made me think that they might have self published this without actually editing it! Why would they, after all? It's such a problematic novel that they probably thought to themselves ''Hey, it's so bad already that people aren't going to notice the mistakes scattered throughout it''...Wrong!!! It was also quite expensive for a paperback, I'm not going to lie. And the series gets even more expensive, which is a blessing in disguise because I was actually thinking about getting my hands on the sequel, just to see how worse it can get! No, I'm not kidding. They actually retail at the price of a hardback which is ridiculous considering that not much effort was put into editing them. I have no problem spending money on books that are actually worth it, even if I don't end up loving them, which is something I do on a regular basis in case you're wondering! But this was just unacceptable!

I'm going to wrap up this review by saying that, Paper Princess is one of the most problematic books I've read in quite some time and that's not okay! I'm even more surprised by the high rating it has and the more than positive reviews! I mean, does everyone else agree with romanticizing abusive relationships and pretending that it's completely fine for others to do so as well? I'm all about respecting other peoples' opinions and this would've been an entertaining novel if Ella wasn't such a doormat and the Royals weren't so insufferable. But, enjoying it while addressing its issues is completely different from swooning over the romance and ignoring how problematic it was completely! Just a side note before I wrap things up, there were no plot twists, nothing interesting was going on, there's nothing dynamic or consuming about abuse and no, this is not a ''Cruel Intentions meets Gossip Girl'' novel.