Hello guys and welcome to the official blog tour for Taming His Hellion Countess, perfect of fans of steamy Historical Romances! Make sure to add it on your TBR lists and keep on reading for an exciting excerpt! 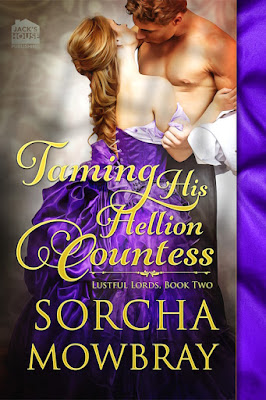 Robert Cooper, the Earl of Brougham must marry in order to fulfill his duty to the title. He’s decided on a rather mild mannered, biddable woman who most considered firmly on the shelf. But, her family is on solid financial ground and has no scandals attached to their name.

Lady Emily Winterburn, sister of the Earl of Dunmere, is not what she seems. With a heart as big as her wild streak she finds herself prepared to protect her brother from his bad choices, even if it means stealing from the Ton. But marrying their way out of trouble is simply out of the question. What woman in her right mind would shackle herself to a man, let alone one of the notorious Lustful Lords?

Cooper’s carefully laid plans are ruined once he must decide between courting his unwilling bride-to-be and taming the wild woman he caught stealing–until he discovers they are one and the same. And when love sinks it’s relentless talons into his heart? He’ll do anything to possess the wanton who fires his blood and touches his soul.

“I tell you it is mine, my lord. Do you question my truthfulness?” She rose from the couch, anger infusing her words with just enough outrage to make him want to believe her.


But there was no possibility she was telling the truth. While no fashion expert himself—his valet would likely suggest he was a fashion imbecile—he knew well enough that women did not mix diamonds and rubies with pearls. Not to mention, she had never, in the time he’d been getting to know her, worn anything so ostentatious.

He turned to face her. “I believe I am, Lady Emmaline.”

Furious, she stormed up to him and attempted to snatch the necklace from his grasp.

Holding it high above her head, he wrapped his free arm around her and pulled her against him. “Ah, ah, ah, my Lady Hellion. First you will admit the truth to me.”

First? He couldn’t help but wonder at himself. The woman he had intended to make his countess was, in fact, a thief. He should be hauling her out of the library and into the ballroom to have the authorities summoned. But he quickly realized he had no intention of doing any such thing.

“Very well, my lord. If I admit such a thing, will you return the necklace to me?” Her lips pressed together, emphasizing her stubborn aspect.

“That rather depends on what you have to say.” He couldn’t hide his smirk. Intuition told him this was going to be an interesting turn of events in his courtship of Lady Emmaline. 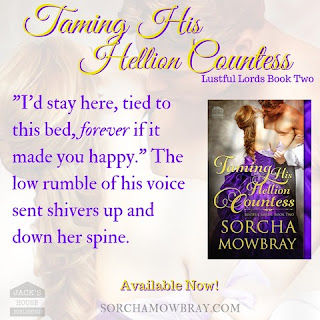 She growled at him a little. He found it adorable.

“Fine, my lord. I stole the necklace.”

She said what he had expected, though with ill grace. Clearly, she was not as entertained by events as he.

“Why, Lady Emmaline? I have not heard of any financial woes related to your family. What could be driving you to such an action?”

His mind ticked through what he knew of her family. Her parents were both dead, killed in a tragic house fire. Her brother didn’t particularly stand out in any fashion among the ton, but then that had seemed typical of her family until now.

In short order, the fear and anger slipped from her face like a mask tossed aside. In its place appeared the neutral expression he had originally associated with her. One that hinted that she found the whole event tiresome, but was too polite to ever say so.

“Boredom, Lord Brougham. Night after night, year after year of attending balls, only to dance once or twice, and then be forgotten once more. Eventually, a woman will find a way of entertaining herself.”

Cooper blinked. Boredom? That seemed preposterous. “If ennui is your issue, perhaps I can offer you something to busy yourself with?”
“Doubtful, my lord.” She dismissed his suggestion out of hand, without having even heard it.

More than a little affronted, he straightened up. “Perhaps, Lady Emmaline, you should consider my suggestion. Under the circumstances.”

With her nose wrinkled, she again conceded to hear him out. “Very well, my lord. Suggest away.”

“Marry me.” He blurted the words out in the most unromantic fashion possible. Of course, the entire scenario was terribly unsentimental.

The blasted woman laughed. She actually guffawed as she held her stomach and bent over as far as her corset would allow.

Feeling peeved about the whole thing, Cooper stood there and waited for her mirth to subside. Finally, as she settled down, he spoke. “I fail to see the humor in this.”

“You have just suggested that I, a known thief—at least by you—marry you.” She chuckled again. “You do, of course, realize how ridiculous that sounds?”

He refrained from grinding his teeth—barely. “I don’t see why it is so ridiculous. I need a wife, and you clearly need a husband to take you in hand and curtail such fiendish activities.”

Lady Emmaline finally ceased laughing. Her features shifted from mirth to a studied seriousness, her gaze full of calculation as she rose. “You may stop right there, Lord Brougham.” She held up one trembling hand. “I shall save you any further embarrassment by clearly stating my position on marriage.”

She tucked her hands behind her back, placing one in the other, then turned to pace as she spoke. “You may not have realized it because men of our social standing often overlook me, but I am a spinster. Firmly on the shelf. And I must say that I have come to find a certain peace in my lot. I have no interest in taking on a husband, or the various responsibilities that come with marriage. I answer to no one but myself, and if I should desire to spend all my pin money on frivolous things, there is no one who can gainsay me on this. I have no need of a man telling me what to do or thinking he knows best. Nothing you can say shall sway my thinking.”

Sorcha Mowbray is a mild mannered office worker by day…okay, so she is actually a mouthy, opinionated, take charge kind of gal who bosses everyone around; but she definitely works in an office. At night she writes romance so hot she sets the sheets on fire! Just ask her slightly singed husband.


She is a longtime lover of historical romance, having grown up reading Johanna Lindsey and Judith McNaught. Then she discovered Thea Devine and Susan Johnson. Holy cow! Heroes and heroines could do THAT? From there, things devolved into trying her hand at writing a little smexy. Needless to say, she liked it and she hopes you do too!