Hello guys and welcome to the official blog tour for To Right the Wrongs by Sheryl Scarborough! Make sure to enter the Giveaway at the end of this post and read my thoughts on the novel down below! Also, stay tuned for my review of the first book in the series, To Catch A Killer, which will be posted tomorrow!

Title: To Right the Wrongs 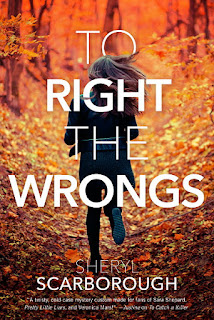 Barely three weeks after catching the killer of Erin's mother and their biology teacher, Erin and her crew are back, up to their elbows in forensics projects. But this time it's with the full approval of their parents.

With Uncle Victor at the helm, Erin and her best friends, Spam and Lysa, are prepping a new classroom for CSI summer camp, where they will serve as camp counselors. Meanwhile, Erin's super-hot new boyfriend, Journey, is graduating, just in time for him to take a position as Victor's intern in the new CSI lab on campus. Journey and Victor are going to take another look at the evidence in the murder trial that sent Journey's father to prison. The girls are under strict orders not to meddle with the murder case, but that's easier said than done...

To Right the Wrongs picks up after the events of To Catch A Killer and finds Erin more famous than ever but, still desperately trying to blend in. She's trying to readjust to her new life, especially after the unexpected events that took place during the previous book in the series and is still extremely interested in forensics! Things aren't that simple when you're Erin Blake though and things take an interesting turn, when Spam's new boyfriend starts acting strangely, their new principal turns out crazier than they expected and Journey wants help digging up clues in order to build a plausible case and get his father out of prison! With that being said, things are pretty hectic and Erin's dreams of being able to blend in kind of take a major backseat!

I'm going to start this review by saying that, I enjoyed To Right the Wrongs much more than I did To Catch A Killer! It was so much easier get into the story this time around and things progressed in a relatively fast and suspenseful pace. I love reading Mystery novels and was very interested in seeing how the author incorporated the Teen YA element into this one, especially since it's an actual sequel and not just a companion!

I really enjoyed the dynamics in this book and the characters' relationships! The friendship aspect was quite impressive since the reader can tell right away how much the three girls care for each other! They worked together so well and had each other's back throughout the novel, without letting any setbacks they came across deter them or ruin their friendship! I also liked Journey but wasn't really in love with him. It felt like he just existed and had no actual purpose in the novel. He did have an impact on the narrative since it was his father's innocence Erin was trying to prove but, at the same time, his presence either served to annoy Erin or make her uncomfortable. I still haven't figured out whether I like him as a character or not but, I have to admit that he made a better impression in To Catch A Killer.

The writing was great and the pace of the story fast but not rushed, which is always a bit hard to get right! It was so much more engaging than its predecessor since we've already been introduced to the main and secondary characters! The first book successfully set the pace for this one  and the author did a great job with it! I loved all the forensic elements and investigation techniques used in this one. It's unpredictability really kept me going and I couldn't wait to finish it and join Erin and her friends in uncovering the truth!

Overall, this is a suspenseful sequel definitely worth reading and I cannot wait to read about Erin's future adventures! I have no idea if there are going to be any more books in the series but, I have to say that it just got better! 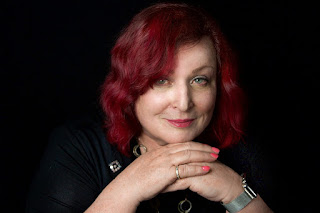 SHERYL SCARBOROUGH is an award-winning writer for children’s television. She holds an MFA in Writing for Children and Young Adults from Vermont College of Fine Arts, lives in Washington state, and has always had an obsession with forensics. When she was twelve, her home was the target of a Peeping Tom. Sheryl diligently photographed his footprints and collected the candy wrappers he left behind. Unfortunately, he was never caught. But the desire to use evidence to solve a great mystery was sparked inside Scarborough all the same. To Catch a Killer is her debut.

a Rafflecopter giveaway
Posted by Book Lady's Reviews at 21:47