Hello guys and welcome to the official Blog Tour for Pacifica by Kristen Simmons, a compelling and impactful read, which hit very close to home with its fascinating take on climate change and its negative effects on the environment and the world itself ! Keep reading to learn my thoughts on it and make sure to enter the Giveaway at the end of this post! 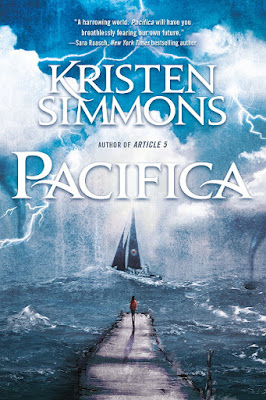 Marin is cosario royalty, a pirate like her father and his father before him. Sailing the ocean to chase adventure is in her blood. But these days no one cares that the island town her people call home is named after her grandfather. They have a new leader, one who promises an end to their hunger – and one who thinks that girls are meant for the kitchen or the brothel. Marin knows she's meant for more than that, and with the sudden influx of weapons on the island, and rumors of a pending deal with the enemy oil nation in her wake, she knows a big score to gain the council's favor is the only way to save her people, and herself.

Ross lives a life of privilege. As the president's son he wants for nothing, but he longs for a life of adventure. On a dare, he convinces his best friend Adam to sneak out to the Docks, the site of local race riots between the poor Shorlings and the upper class. But when Adam is arrested along with the other Shorlings, and not even the president is willing to find him, Ross finds himself taking matters into his own hands. He journeys back into the Docks, ready to make deals with anyone, even a beautiful pirate, if it means Adam's safe return.

When Marin and Ross meet in dangerous Shoreling territory he sees a way to get his friend back and she sees her ticket home. The ransom a president’s son would command could feed her people for years and restore her family’s legacy. But somewhere in the middle of the ocean, Marin must decide if her heart can handle handing over the only person who has ever seen her as more than a pirate.

Pacifica follows two very different characters, whose paths intertwine in an effort to save what's left of the world as they know it. Told from the perspectives of both Marin and Ross, our main characters, we get the perfect insight to a world plagued by the negative and terrifying effects of climate change, which eventually led to environmental damage and as a result, destroyed the planet itself. In this Dystopian version of a completely altered and mostly ruined Earth, the Relocation Act plans to make things right by sending a selected few to a place called Pacifica, the future of civilization and the beginning of something wonderful for those lucky enough to visit it first. But, not everyone is as keen to embark on this out of nowhere journey, as the government seems to be and those that oppose to it, make sure to let everyone know by rioting every night. One reckless night leads to Adam, Ross's best friend, being arrested along with the poor Shorlings that reside in the Docks and when his father, the President, will do nothing to bring him back, Ross will take matters into his own hands. He's determined and will do whatever it takes to find Adam, even if it means making a deal with a pirate. Which is where his path crosses with Marin and together, they embark on a dangerous journey to bring his best friend back safe, while preventing a sinister plot and saving the world in the process!

Pacifica is such a well written novel and I was immensely intrigued, as soon as I laid my eyes on its cover and read the synopsis. I've read so many books over the years but, none that had to do with pirates which is extremely weird since I live for them and their scandalous adventures! The beginning was a bit slow and it took me a couple of chapters to get into it but, after the idea behind the book itself was introduced and the characters' background slowly started coming into focus, I became completely engrossed in the story and couldn't stop reading! Kristen Simmons managed to create this terrifying world I could easily imagine myself living in and make the main characters easy to connect with, even though they were at the opposite ends of the spectrum in terms of social and economic status. Which just goes to show that, in the end, we're all the same and our ''differences'' don't matter when it comes to saving the world. It also hit very close to home since, pollution is getting out of hand because of this materialism that's taken over the world and the negative impact our continuous technological progress has on the environment.

The characters themselves were a perfect reflection of the world and the circumstances they grew up in. Marin is a carefree spirit who refuses to be trampled by a system that keeps taking without giving anything in return and will do anything for her survival. She's extremely clever and will take every opportunity that arises, if it means feeding herself and all the unfortunate souls affected by this unacceptable manipulation of power and influence rich people unfortunately have. Her strength could be felt from the very first chapters and her voice had meaning and depth. Definitely a three dimensional character who managed to accomplish so much with her mind and sense of right and wrong!

Moving on to Ross who, at the beginning, came across as very privileged and spoiled, not understanding the consequences of his actions until it was to late to go back and change them. His development was definitely more obvious than Marin's, in terms of character growth. I felt like he matured so much throughout the novel and started taking things seriously when he realized that, life's not a game and when the inevitable happens, the string of reactions it sets off cannot be prevented, even if we're talking about the president's son. He had to make some tough choices which shaped him and made him realize that, doing what's right for the world was more important that conforming to the wrongs of a selected and privileged few.

The secondary characters added so much more to the story and gave us a sense of understanding from where both Marin and Ross came from. The dangers they faced together brought them closer and the author did a great job of using them to keep the story going, without making it feel predictable or slow paced. On the contrary, once everything about the changes the world had to face in the wake of this environmental disaster was revealed, everything fell into place and the plot became even more interesting than it had started out being.

Moreover, the writing spiced things up, especially because the book was told in both Ross and Marin's perspectives, something that I personally prefer as a reader but is so hard for authors to get right. Meaning that, sometimes, the different voices of the characters don't stand out because there's nothing to set them apart from each other. Thankfully, that was not the case for Pacifica! Kristen Simmons managed to give us an insight on both worlds, before they merged together and became one in the face of disaster and utter destruction! The political aspect of the story - which is what had me worried - was also very well written and executed, a fact that I was extremely thankful for! It made complete sense without overshadowing everything else and added so much more to the story, how it progressed and eventually, how it ended!

Even though this was a Fictional story set in a futuristic world, it was extremely relevant to the world we live in today and definitely made an impact on me, as a reader! Seeing the world destroyed because of climate change is a fear most of us don't realize can become reality much sooner than we expected, which makes it even more terrifying! Not trying to be a pessimist but, both the stories we read and the world we live in are extremely unpredictable and we can only delay the inevitable, without completely preventing it from taking its course, for a certain amount of time.

Overall, Pacifica was a great and solid read, which will have an impact on anyone who decides to pick it up and dive into its pages! Its characters have a certain depth that makes them even more likable and its fast pace makes it engaging and suspenseful, making it impossible to put down before reaching the final chapter!

KRISTEN SIMMONS is the author of the ARTICLE 5 series, THE GLASS ARROW, and METALTOWN. She has worked with survivors of abuse and trauma as a mental health therapist, taught Jazzercise in five states, and is forever in search of the next best cupcake. Currently she lives in Cincinnati, Ohio with her husband, where she spends her days supporting the caffeine industry and chasing her delightfully rambunctious son.
{Website | Goodreads | Facebook | Twitter | Instagram}