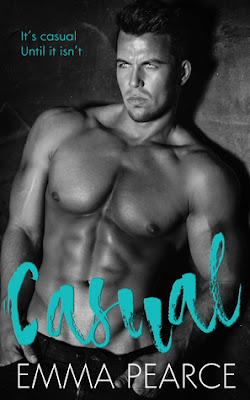 It was supposed to be a one night stand.

But I can’t get him out of my mind and Aiden doesn’t seem ready to let me go just yet.

He sounded so good on the dating app he had to be fake. So I agreed to meet him, if only to expose a catfish. But Aiden was not like the pictures.

Oh no. He was so much better.

I want to stay with him. I want to pretend this won’t blow up in my face. But after so many heartbreaks, I can’t let him in. I can’t let myself fall.

Is there such a thing as casual turning into forever?

*A free copy of this book was provided in exchange for an honest review. All thoughts and opinions are my own!*

Casual follows the life of our main character Christine, whose path intertwines with Aiden's - sexy lawyer CEO alert - when they meet on Tinder. At first, everything seems to be too good to be true, especially because of Christine's past and her disappointing experiences with men. Everything starts out as a one time thing but, turns into so much more without them even realizing it!

This one started out very promising, especially because I immensely enjoy light, quick and fun Romance novels that have this amazing ability to take my mind off things for a bit. This was definitely a very quick read and I enjoyed its premise and how it progressed but, it had its flaws. First of all, the idea of a romance being born out of a dating service is all too read nowadays but, I've actually never read a novel based on that particular concept. Which made this even more interesting than I'd initially expected. Seeing how such a relationship would normally play out through the pages of a book made it even more vivid, I guess. (It is a thing in general but, it's never been my thing personally because I believe in eternal love and all that hopeless romantic bullshit you're probably tired of hearing about.)

Christine was an okay main character, even though her insecurity frustrated me at times and her describing herself as ''average'' more than once, didn't really help her case. She lacked a certain depth that makes characters relatable and easy to connect with, especially because she didn't even try see herself in a more positive light and her self-consciousnesses was just troubling. Especially because it never got better. Also, her group of friends wasn't much better. I really wanted to like them and they did help Christine in their own way but, at the same time, their reactions at her life problems blew my mind with how mediocre they were.

Aiden was also really underdeveloped as a character and love interest. I perfectly understand that this is a novella but, it was extremely rushed and everything happened way too fast, even for a novella. There were so many missed opportunities scattered around this story and its many plot holes. It could've been a much better version of it if some things were better thought out and the characters weren't so two dimensional. The chemistry between them was obviously there but again, it lacked a certain depth that would've made them much more interesting than they were. I wasn't sure whether to root for them and their relationship or just give up on them. There were mixed emotions regarding the nature of their relationship since sometimes, it made me swoon and then, they had to go and ruin it with their baffling behavior. They spent so much time together but, Aiden apparently isn't aware of the fact that Christine has a dog and she doesn't think that mentioning it is important. That's one - unfathomable - example of the uncertainty surrounding both of them since every single person I meet knows I have a dog within a matter of minutes. Maybe it's just me but, I would have expected her to mention her dog to the man she's falling in love with at least within a couple of days.

Overall, I really enjoyed Casual's premise and feel like there are so many things the author could have done to make it even more enjoyable! There were a lot of grammatical mistakes and the writing wasn't that polished so, I feel like not a lot of effort was put into the novel as a whole. I sincerely believe that, future works will be so much better since the writing was pretty good and with some meticulous planning and more in depth characters/plot development, future books can become so much more than this!