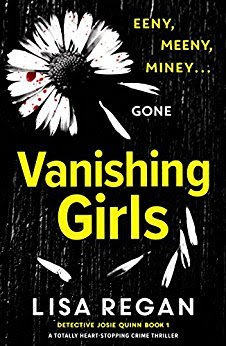 bright, warm red blood. Not a word, actually. A name…


Everyone in the small American town of Denton is searching for Isabelle Coleman, a missing seventeen-year-old girl. All they’ve found so far is her phone and another girl they didn’t even know was missing.

Mute and completely unresponsive to the world around her, it’s clear this mysterious girl has been damaged beyond repair. All Detective Josie Quinn can get from her is a name: Ramona.

Currently suspended from the force for misconduct, Josie takes matters into her own hands as the name leads her to evidence linking the two girls. She knows the race is on to find Isabelle alive, and she fears there may be others…

The trail leads Josie to another victim, a girl who escaped but whose case was labelled a hoax by authorities. To catch this monster, Josie must confront her own nightmares and follow her instinct to the darkest of places. But can she make it out alive?

Fans of Angela Marsons, Helen Fields and Robert Dugoni will be utterly gripped and sleeping with the lights on once they discover the first in this unputdownable new crime thriller series.


I fell in love with Vanishing Girls as soon as I started reading it! It was full of suspense and I finished it in a day because it was impossible to put it down! It's been a while since I've felt so strongly about a book and it was all I needed to fall in love with the Genre even more! I was never really into Mystery/Thrillers because I had this ridiculous notion that, I could only enjoy them on screen. But, Lisa Regan proved me wrong by keeping me at the edge of my seat throughout this book and engaging me in her twisted and out of this world storyline!

The only thing you need to know about the plot itself is this: mind-blowing and extremely fascinating. We're not going to get into details because that will obviously spoil the wonderful experience of going into this book and not knowing what to expect. Which is highly recommended! The characters were so complex and well written that, I was actually very impressed. Their development throughout the story was guaranteed from the moment I really got into it and the uncertainty of what was happening was highly addictive, mainly because it was combined with an adrenaline filled suspense!

I fell in love with Josie as soon as she was introduced in the novel. She's such a strong-willed individual, even though she went through some very dark and traumatic events during her earlier years. She's determined to get to the bottom of things and uncover the truth, before it's too late. Even though everything's on the line since she's technically suspended while conducting her own investigation, she never gives up. It's obvious that something fishy is going on with the girls' disappearances and the truth she uncovers by the end of the novel is both shocking and unexpected! I didn't agree with her way of thinking sometimes but, I could definitely understand where she was coming from. She's probably one of the most complex characters I've ever come across and I'll definitely enjoy getting to know her more during the following books in this series.

Ray was also a very interesting and complicated character. His relationship with Josie was truly an unusual one but, if we take their past and what they've been through into consideration, it kind of makes sense. I wasn't really rooting for them to get back together because I truly enjoyed Luke's refreshing and swoon worthy ways of caring for Josie but, I could appreciated their history. I feel like Luke balanced Josie out perfectly and he never pushed her or patronized her. He perfectly understood what she was going through and was there for every step of the way.

The only thing I definitely did not agree with was the fact that Josie kept huge parts of herself from him. He had the right to know what she went through, especially if it still came back to haunt her in stressful situations and affected her life and those around her. I strongly believe that trust is the key point to a successful relationship and I'm 100% sure that Luke would've stood by her, through thick and thin. Keep in mind that, not every single thing about Josie was revealed at once, which I actually quite enjoyed. Getting to know the main character was a process that took some time and added to the mystery of the book itself.

Lastly, the quality of writing is perfect! I usually prefer stories told in the first POV but, I immensely enjoyed Lisa Regan's storytelling abilities and how she made everything seem so real. The vividness of the scenes described throughout the book were out of this world and I did not mind the third person POV at all! It made the experience of reading Vanishing Girls even spookier and suspenseful. The pace was fast - exactly how I like it - and the events that unfolded in each chapter literally took my breath away! Moreover, I found the flashbacks quite dark and mysterious. An intriguing addition to a memorable book! They came out of nowhere and I actually could not figure out what was going on until the truth was fully revealed dyring the last couple of chapters and put the scattered pieces of this huge puzzle where they belonged!

I cannot recommend this one enough! Definitely one of the most surprising, unpredictable and engaging books I've read in quite some time! I seriously cannot wait for its sequel and I'm excited to see how Lisa Regan will continue on with Josie's story after the heartbreaking ending of Vanishing Girls. The possibilities are endless and I'm extremely curious to see how she'll take advantage of them!