Elena Reviews: The Perfect Duchess {The Macalisters #2} By Erica Taylor 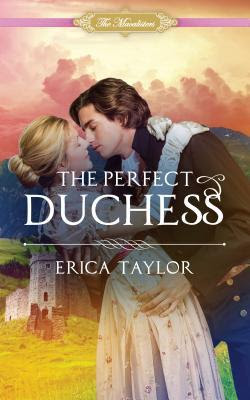 Andrew Macalister, oft regarded as the Stone Duke of Bradstone, hates his annual birthday ball tradition. He dislikes facing those around him who only see him for his title, and has given up on a chance to live a normal life. That is, until he spots Lady Clara Masson across the ballroom. Clara's twin sister is the woman who infamously jilted Andrew at the altar five years ago, but little does Clara know, Andrew had been smitten with her since childhood, and he finds her presence a ray of sunshine in a dreary dukedom.

When Clara's life is threatened by her evil brother, Johnathan, Andrew must do the only thing he can think of to save her: propose marriage. Between Clara's trust issues and Andrew's battle with societal norms, two find romance under dangerous circumstances.

*I received this book for free through NetGalley, in exchange for an honest review. All thoughts and opinions are my own!*

The Perfect Duchess follows the story of Andrew, a Duke who dislikes anything that has to do with social gatherings, especially the ball that is organized every year for his birthday. Nobody sees him for who he truly is and he must do what is expected of him, in order to keep up appearances. So, when he is seen courting Clara, a social pariah, rumors start circulating about their history. Because, ladies and gentlemen, Clara's twin sister left Andrew waiting at the altar five years ago and of course, never showed up to marry him. When Clara's life is obviously in danger because of her psycho brother who used to be friends with Andrew, he makes a proposition that Clara cannot resist. Because it's everything she'd been dreaming of since the first time she saw him. And it's the only thing that can help them both and keep her safe.

I'm a sucker for Historical Romance and I genuinely expected to love The Perfect Duchess. Don't get me wrong. The premise had a lot of potential and I immensely enjoyed the beginning and ending of the novel. The middle part though felt a bit all over the place and the characters went along with it, as did their development. The first couple of chapters promised a lot, which was not met by the rest, even halfway through. (Way of thinking in Greek, fingers crossed it'll actually make sense translated)Which basically means that, after being introduced to the story, I had relatively high expectation for what would follow.

One of my biggest problems with the book was Andrew's behavior. His hot and cold moments with Clara were extremely tiring and confusing. Add frustrating to the list and there you have it! Clara was a bit better at handling her feelings but, her way of thinking left me completely speechless at times. Also, there were a lot of inconsistencies throughout the book and the plot itself felt very rushed. It was like the author wanted to include a number of topics and somehow, cram them into three hundred and something pages without explanations that made complete sense.

I really liked the plot twists and the fact that they existed in the first place, because they're not really common in Historical Romance novels but, I feel like they were ''quantity over quality''. They were not developed well enough to be considered part of the actual plot and consistent with how it progressed. Too much information is such a small amount of chapters is overwhelming, to say the least and losing sight of the story is inevitable. I really think that if the author had handled them differently and not rushed through them in order to get it done and over it, this book would've been so much more enjoyable than it ended up being. Because they were extremely unpredictable and mind blowing, I just think their poor development ruined the excitement of their existence in the book. As for the action, the majority of it took place towards the last couple of chapters that felt very rushed and underdeveloped as well.

Something that I did enjoy was the representation of society in the book itself, because it gave us a glimpse at how petty people behaved back then. Having Clara upsetting them with the way she stood up for herself and held her head high throughout  the book, was truly satisfying! I would've done the same thing myself! Add her happily ever after added to their scorn, which was quite delightful, let's be real. I love the portrayal of strong willed heroines at such setting and this one was definitely no exception!

Overall, the development of the book in general didn't really sit well with me because of how underdeveloped it clearly was. The writing wasn't great either and the romance aspect frustrated me after it started getting inconsistent and confusing. It had a lot of potential as a story but, it wasn't taken advantage of.