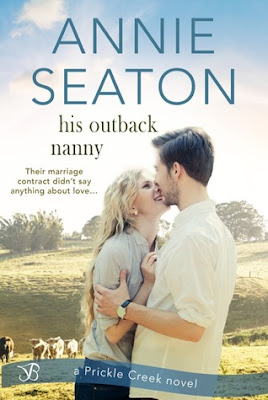 Jemima Smythe is over the world of fashion. But when her dream of teaching falls through, Jemmy is determined to show her hometown she’s ready to put down roots. Three beautiful and boisterous kids in need of a nanny offer her an opportunity to prove just that. But their smoking-hot dad, Ned, offers her another—become his wife, as a matter of convenience only.

Ned McCormack is at his wits’ end. A single father to three kids, he quit the city and moved home to the Australian Outback in order to spend more quality time with his family. Unfortunately, the farm needs a lot of work. Just when he’s ready to give up, help comes unexpectedly in the form of a supermodel mistaken as his wife-to-be.

Not a bad arrangement, if only they can stick to the rules of their strictly-business marriage—no kissing and absolutely no falling in love allowed.

*I received this book for free through NetGalley, in exchange for an honest review. All thoughts and opinions are my own!*
His Outback Nanny follows the story of Jemima and Ned, who decide to marry each other for convenience. Jem is a model and she's gotten over the world of fashion and the pressure that comes with it. She's always aspired to be a school teacher and goes back to her hometown, in order to pursue her dream. But, nobody will hire her to be a teacher since she's apparently overqualified for the position. That is why she decided to agree on a marriage of convenience with Ned. He's a widowed father of three and the work that needs to be done in the farm he decided to take over, is too much for him to handle on his own. He can't afford to hire any help and that is why he cannot resist the arrangement. Both of them get tangled up in this seemingly innocent settlement, even though it'll obviously hurt more than they had originally anticipated, when it will inevitably come to and end.

First of all, this one was a very fun and quick read! I really enjoyed its premise and I was very interested in seeing how it would develop. The writing style was great and the story line itself, was something different from what I've read in the past. I really like Jemima as a main character but, I couldn't fully connect with her. She was okay as a main heroine and I could definitely understand her struggle but, at the same time, she had no traits that I found impressive or admirable. I guess the relationship she slowly built with Ned and his children was great but, at the same time, I can't ignore the fact that everything about it seemed underdeveloped and rushed.

Ned was also a pretty good guy and I loved his devotion to making sure his family was taken care of. At the beginning, their agreement seemed to have a pretty absurd reasoning but, as the facts unfolded, I could see it actually happening in reality. Not that marriages of convenience aren't a thing but, as a hopeless romantic, I've never really supported or liked them for that matter. I feel like they both handled it a mature way, up until the point where they started falling in love and decided to give up and stay away from each other, instead of trying to make things work and pursue their happy ending. They obviously had the chemistry needed to make things work and Ned's kids were quite in love with Jemima so, why the intended heartbreak when things started getting serious? I'm pretty sure I have an answer for that particular question. We all tend to be afraid of going after the things we truly want, in case they end up being completely different from what we had expected. Which is basically human nature. But, if you won't risk for it, you'll never know how good having it feels. Whatever that is.

To wrap things up, I think that, my biggest issue with this book was how rushed it felt from the moment I started reading. I always state whether a book is fast paced (which is what I personally prefer as a reader) and when it's rushed. Which are two completely different things, in case you're wandering. Rushed usually means a combination of an underdeveloped plot and its characters. The author rushed through the facts at the speed of lightning and I was not satisfied with it. Everything happened extremely fast and even though quick reads are the best, this one didn't really have anything to make it stand out from the rest. No plot twists were thrown in, nothing exciting happened and the ending, even though it provided the closure us readers are always after, was quite predictable.

Overall, this was a very sweet story that I enjoyed reading and I would recommend it to anyone looking for a quick, easy and light read. I don't regret picking this one up but, it definitely wasn't something that will stay with me for a long time.