Hello guys and welcome to the first discussion post of the year! Today, I decided to share with you the books I did not finish during the year of 2017 and explain why! I've been wanting to post this particular discussion post for a while, even though it's not technically an actual discussion topic. Make sure to check out my discussion on

So, without further ado, here are the

*The Gunslinger {The Dark Tower #1} By Stephen King

I've never read a Stephen King book - mainly because of the how huge they are and how committed one should be in order to actually read them - and decided to join the bandwagon starting with this one. The movie piqued my interest and as soon as I watched the trailer, I ordered the book itself. I was extremely disappointed by its slower than a turtle pace. I could not get through it, even though I tried so hard because I desperately wanted to read it first and watch the movie later. The writing style was not to my liking either and it took me at least a hundred pages to start getting into the story. Sadly, I just had to put it down.

*The Chemist By Stephanie Meyer

I was very intrigued by this one an the synopsis really fascinated me since I've always been into Crime/Mystery in general. I've never really liked Twilight and Stephanie Meyer's writing was not that great so, I was a bit hesitant but, decided to give her another chance since this is a completely different Genre from what she usually writes. Plus, it sounded like something interesting that I would probably end up enjoying. That obviously did not happen. The pace was extremely slow for what the plot promised and it got to the point where I was actually bored with the pointless descriptions, flat writing style and uninteresting plot development. A bit harsh, I know but, this one was a huge flop. I expected to at least enjoy it a bit.

I started Hollow City immediately after I finished Miss Peregrine's, which I never do. I always wait a couple of weeks before picking up a sequel, not to the point where I forget what actually happened but, just enough to kind of take a break and increase the anticipation and excitement of continuing on with an enjoyable story. Well, unfortunately, I did not follow that strategy with this one and ended up unable to finish it. Which does not mean that, I was not actually enjoying it. This series has one of the most fascinating story lines ever and hopefully, I'll manage to actually finish it this year!

Before we go on to this one, I should probably mention that, me and books that have a circus setting have never gotten along. But, Freeks was one of my most anticipating reads and even though I haven't really had much luck with Amanda Hocking's previous novels, I was extremely fascinated by it and could not wait to get my hands on a copy. I have no idea what went wrong with this one, which might sound weird. On the one hand the pace was pretty slow but, on the other hand, there were a lot of interesting things happening throughout it. I also got into a tiny reading slump while I was reading it so, picking it up was kind of a recipe for disaster. I needed something to cheer me up so, I had to put it down. It had a very promising story line though and a lot of potential. 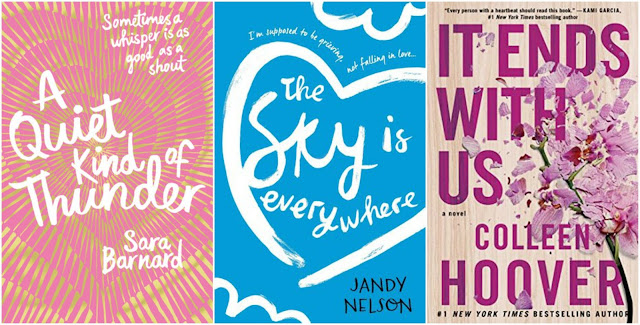 *A Quiet Kind of Thunder By Sara Barnard

Out of the books on this list, I was probably the most disappointed by this one. Another read I was desperate to pick up but, ended up putting down because of its extremely slow pace. It did not reach my expectations because of how slow the story itself moved forward. I know slow pace has become the center of this post but, I'm always upfront about what I'm looking for in a book before I even purchase it. And an average or fast pace in a story without making it feel rushed is more than ideal for me. It definitely deals with some sensitive subjects that were represented perfectly, in my opinion but, I just couldn't get through it and had to put it down.

*The Sky Is Everywhere By Jandy Nelson

This particular Contemporary has been on my TBR list for many years and I was ecstatic when I finally managed to pick it up. I think it's the only one I actually started reading before I picked up from where I left off at Book Lady's Reviews - meaning before I started blogging again - but I really wanted to mention it because it was definitely bad luck combined with the biggest reading slump I've ever been on. So, I thought I'd include this as an honorable mention since it's unfair of me not to acknowledge it.

*It Ends With Us By Colleen Hoover

The only other book I've read by Colleen Hoover is Ugly Love which I actually enjoyed but, that was not the case with It Ends With Us. I tried extremely hard to get through this but I could not for the life of me finish it. So, naturally, I had to put it down. I didn't like the chemistry between the characters, found the plot to be overused and tiring, did not enjoy the emotional manipulation that took precedence over everything else and stopped reading when I had enough. That's basically the gist of it when it comes to this one. Extremely predictable development added and we already have a review without me even finishing the book itself.

That was it for today's post guys! Make sure to let me know if you've read any of the books featured and whether you actually DNF books or just push through them, even if you're not really enjoying them!