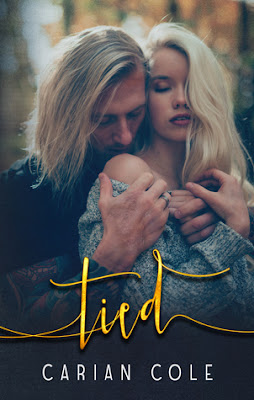 
My childhood was stolen by a horrible man when I was kidnapped at five years old. I've forgotten what love, happiness, and hope feels like. I am numb and lost, clinging to a childhood fairytale.

Him
He's possibly as damaged as I am. Maybe even more. He's scarred just as much on the inside as the outside. Just like me. Haunted by his own tragic past, he doesn't speak or smile. He chooses to live in the woods, far away from society. I've been told to stay away from him, but I can't because he's the one who saved my life. He's also the only one who has ever made me feel. And now, I want to make him feel, too. I'd do anything just to see him smile-especially at me.

I remember starting this one a long time ago but for some reason, never finishing it. Probably during one of my reading slumps. But, I'm so glad that I decided to pick it up again since it's definitely a book wroth reading!

Tyler and Holly, two very broken individuals meet in the most unconventional and memorable way. He saves her from the man who abducted her when she was just eight years old and she returns to her family after so many years to discover that, nothing is the same and it probably never will be again. Her mother is being distant and doesn't trust Holly to take control of her future so, instead of having the reunion one would expect, she decides to send her to a facility that deals with her kind of trauma. Her father doesn't have much say in the matter and all her brother can do, is stay by her side and offer her a place to live somewhere far away, as soon as she gets better handle on things.

Tyler has been through unimaginable heartache, things that most people wouldn't survive or be able to get over. A tragic accident left him scarred a broken when he was relatively young and after a couple of years, a crash left him with both physical and emotional scars that made people fear him and call him a monster. He lives up on the hill in the forest, secluded from everyone and everything, until Holly comes along. They're kindred spirits and nothing can keep them away from each other. And as much as Tyler tries to resist his feelings and keep her away for her own good, he does not succeed because their chemistry is too much and cannot be denied.

First of all, I fell in love with both characters and their brokenness called out to me. Together, they made complete and utter sense. After everything they went through, they needed one another to completely heal. Their romance had this slow build that's actually very rare to come by these days and I immensely enjoyed connecting with them and discovering more about them through it. It's not all about the romance though. We get a glimpse of how what these two went through affected their families and what they did to cope with it. But, let's be real here. I hated Holly's parents and how they treated her like they would've preferred it if she were dead. Her mother made her feel unwanted all the time and was great at pretending that nothing happened. But, at the same time, she treated her like she was fragile and would never get better or be able to have control of her life. She was awful and I was really heartbroken over how she tried to keep Holly away from getting to know her sister and made her feel like she didn't belong with them anymore, like she was replaced and her coming back spoiled things for everyone.

Holly was such a strong and determined main heroine! After everything she went through, everyone expected her to just give up and stay in that facility forever but, she wants to create new memories and get her life back. She truly wants to get better and even though she can't get the years that were stolen from her because of some psycho, she still wants to experience the world and live life to the fullest. Tyler is simple perfection and I couldn't have shipped him and Holly more than I already do! He created this huge wall that nobody could crack around his heart and treated people like shit so that they wouldn't get too close but, Holly managed to get past his defenses and brought him back to life, in a way. They couldn't have been better for each other, which is obvious from the very swoon worthy moments between them throughout the book!

There's a slight twist towards the ending that I kind of saw coming but at the same time, couldn't be sure about or predict. There were some hints throughout the book that Holly was very familiar to Tyler but, I didn't really think about what might have happened for them to have met each other some time in the past. The truth was very surprising and unexpected though so, be prepared!

Moreover, the writing was beautiful and made the book even better! Because writing is always important folks! The pace was fast and this was such an immensely satisfying book that I could not put it down for even a second. I finished it in a day and was hungry for more. It didn't feel rushed at all, even though it was relatively short and I enjoyed it so much more than I thought I would. I didn't have high expectations because the majority of New Adult novels I have tried to read recently have disappointed me. Which doesn't mean I'm prejudiced in any way shape or form, just genuinely disheartened by the fact that I haven't come across a New Adult read that blew my mind until this one!

So, yeah, this book is definitely not for the fainthearted people out there. A lot of events that could trigger some people take place so, just be warned about that! Overall, Tied is definitely a book worth reading, even if it is heart wrenching. I got so emotional while reading what Holly and Tyler had to go through until they could finally find each other. Their story is raw, poignant and beautifully written. The author doesn't sugar coat anything - even though there are no graphic details of what each character went through - and manages to turn a heart breaking plot into a fascinating story that grabbed my attention from the moment I started reading it and wouldn't let go until I finished! Highly recommend!