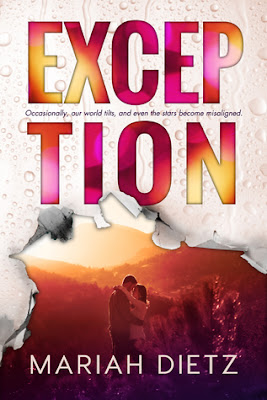 And to make matters worse, he looks good doing it - too good. Joey DeLuca should have been nothing but a maddening memory, a blip on my radar during my three month sabbatical in my small hometown while I get back on my feet.

My time back home was supposed to be simple. Easy. Fast. But he's everywhere I go, invading my thoughts, and stealing my attention.

*A free copy of this book was kindly provided through NetGalley! All thoughts and opinions are my own!*

Exception follows the lives of Joey and Kennedy, whose paths intertwine and merge together to create this wonderful and swoon worthy story!

Kennedy decides to temporarily leave her dream life in the big city behind and go back to her small hometown for a couple of months. The plan is to go back and live with her parents, get back on her feet and return when she's financially and emotionally stable. Her father isn't really supportive of her decisions in general, which is something he makes quite obvious as soon as he's introduced in the novel. His remarks are harmful and completely out of line, something that makes Kennedy even more determined to get away. Her sister isn't mentally stable and her parents want to pretend that everything's all rainbows and butterflies with her condition, instead of getting her the professional help she needs.

Joey is a suspended detective, who decided to get away from everything for a while and help his brother build his dream house. He's handsome, arrogant and exactly what Kennedy does not need. She tries to deny the chemistry between them and stay away but, the attraction gets too much to handle. It doesn't take long for them to act on their feelings and give in to each other. But, Kennedy never intended on falling in love and her initial plan was to stay for a couple of months and then go back to the city. Joey's patiently waiting for her decision but, how long will it take and how much will it affect their fragile relationship?

I was really interested in reading Exception since the synopsis intrigued me and made the book sound like something I'd personally enjoy. I didn't have the biggest expectations but, I was pleasantly surprised by how much I enjoyed it! I haven't read a New Adult novel in quite sometime so, I was just looking for something to get me back on track. The story started a bit slow and there were times when the pace followed but, everything got so much better once I was a couple of chapters in! It was very fast paced but didn't feel rushed and I immensely enjoyed getting to know the characters and connecting with them throughout the novel!

Kennedy was a great main heroine and her flaws and insecurities made her even more relatable. She was a very likable character and she owed up to her mistakes without trying to come up with pointless excuses. She's also very caring, which becomes quite obvious as the story progresses and her past is slowly unveiled. The truth of everything that has happened in her life is slowly revealed to us and catching up on her. How people see her sister, Grace, is something that has always haunted Kennedy and the fact that things are getting worse and nobody is acknowledging them, is affecting her even more. All these flaws, imperfections and difficulties that Kennedy faces in her every day life, make it even easier for us to relate.

Both and Joey and Kennedy are forces to be reckoned with and when they collide, sparks explode and we're left swooning over them. Once they laid their eyes on each other, the inevitable happened and it eventually led to them falling for each other. Things aren't so easy though since, at first, they're both trying to deny their feelings and stay away but, love always prevails. Simple as that. The only problem is that, if Kennedy decides to leave for the city again, the distance may prove fatal to their relationship.

The secondary characters were also very well written and I seriously fell in love with Kennedy's best friend, Violet. Who I would love to read a novel for, by the way. Same goes for Grace. She's been through so much, something that we're briefly made aware of throughout the book but don't really have the complete picture of. That is why I'd really love to read her story and learn more about her past. And future, of course. Kennedy's mother kind of balanced things out but, I wasn't really a big fan of her. Complete and utter indifference came over me, as a reader, every single time she was mentioned. As for her father, I can understand the reasons behind his behavior but, it was completely unacceptable and inexcusable. A couple of chapter in and I was already frustrated and angry because of the way he treated Kennedy. Something that did not change with his dumb apology.

The plot itself was extremely cliche, I'm not going to lie. But, it's the kind of cliche that I personally enjoy reading about. The story didn't feel rushed, nor did it drag on and on, which I was very thankful for. It was interesting enough to keep me reading, even though nothing mind blowing happened throughout it. There were some very steamy scenes, which were also well written and executed by the author. Also, the biggest revelation was Grace and how her condition affected the lives of everyone around her. It was very interesting to see things through Kennedy' s perspective because she wasn't the one going through everything but, she was directly affected by it. The writing was great as well and the novel itself was a nice surprise. I didn't think I would genuinely enjoy it so much.

Overall, Exception wasn't a breakthrough novel nor did it blow my mind away with its authenticity, because I have read countless New Adult stories that are very similar to it but, it got me out of my Fantasy phase and kind of reintroduced me to the genre. Kennedy and Joey's story is one I personally do not regret reading and I'd definitely recommend it if you're a fan of New Adult novels or if you're just looking for something quick and easy to read. If you're expecting a unique plot that you've never encountered before, this is definitely not it. It's a cliche that I cannot get enough of and I immensely enjoyed!