Hello guys and welcome to the second to last post for this years most anticipated book releases! I cannot believe that, December has already descended upon us and I'm so sad to see this year go. At the same time though, I'm extremely excited for what the new year, that is slowly and steadily approaching, will bring!

As always, I'm going to share with you my most exciting December releases in two parts so, make sure to come back sometime next week for Part 2! Also, don't forget to let me know which books you're most excited for and cannot wait to read!

*Year One {Chronicles of the One #1} By Nora Roberts

Nora Roberts is a very well known author and she mostly writes Historical Fiction. That's why I was very surprised when I saw her new series! I'm also quite intrigued of course and would really like to explore more of her work and pick up some of her other novels as well. Year One has a very interesting plot and is set in a world where a plague spreads quite suddenly and very quickly. And everything takes off from there. The world is in shambles and half of the population is wiped out. Sounds more of a Dystopian but, it's categorized as Fantasy so we're just going to roll with it!

*Ever the Brave {A Clash of Kingdoms #2} By Erin Summerill

Ever the Hunted is still on my wishlist and this is definitely a Fantasy series I really want to start someday! There seem to be mixed reviews and it has a lower rating than I expected but, I feel like it's worth a shot! A girl who tracks criminals in the woods alongside her father and brings them to justice? Yes please!

Another series that's on the waiting list and I want to start it as soon as possible! The Bear and the Nightingale actually came out in January and of course, it's been on my TBR list since then. It sounds magical, mysterious and extremely fascinating!

*The Rebels of Gold {Loom Saga #3} By Elise Kova

I've featured this series on  my blog before but, haven't picked it up yet. Story of my life right?! It became quite popular and a lot of people have enjoyed the first two books so, fingers crossed that I'll be able to get my hands on it soon! 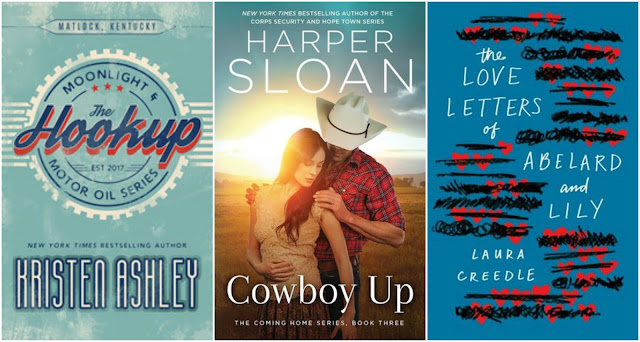 This book is so right up my alley it's actually ridiculous. I'm so excited and cannot wait to get my hands on this beauty! I have read some of Kristen Ashey's books and I have to say that, I was not disappointed. This one sounds like such a fun and entertaining read so, I'm read for it!

I have read and reviews the first book in the Coming Home series and I'm actually going to be participating in the official blog tour for Cowboy Up! I wasn't blown away by Lost Rider but, I did enjoy the setting and would definitely like to give this series a second chance! I might have to get my hands on the second book though and then move on to this one!

*The Love Letters of Abelard and Lily By Laura Creedle

This sounds like such a raw and poignant read! It also has to do with mental illness and I'd really like to read it in order to see the author's take on it. Last but not least, there's apparently a classic called ''The Love Letters of Abelard and Heloise'' which I knew nothing about so, that is added to the TBR list as well!

Hope you guys found this post helpful and added some new releases on your TBR lists! Make sure to come back next week for Part 2 and let me know whether you've already started any of these series!
Posted by Book Lady's Reviews at 22:58