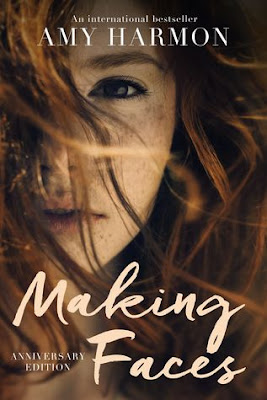 Ambrose Young was beautiful. He was tall and muscular, with hair that touched his shoulders and eyes that burned right through you. The kind of beautiful that graced the covers of romance novels, and Fern Taylor would know. She'd been reading them since she was thirteen. But maybe because he was so beautiful he was never someone Fern thought she could have...until he wasn't beautiful anymore.

Making Faces is the story of a small town where five young men go off to war, and only one comes back. It is the story of loss. Collective loss, individual loss, loss of beauty, loss of life, loss of identity. It is the tale of one girl's love for a broken boy, and a wounded warrior's love for an unremarkable girl. This is a story of friendship that overcomes heartache, heroism that defies the common definitions, and a modern tale of Beauty and the Beastwhere we discover that there is little beauty and a little beast in all of us.

Making Faces fell completely different from anything I've read in my whole life. This is a review written after the third time of me re-reading this book. Want to know why? Because I couldn't put my thoughts down after the first two times and I was able to do so a couple of days after the third. No, I'm not exaggerating. This book has made the list of my all time favorite books, which is saying a lot!

There are a lot of misconceptions concerning beauty and what it actually consists of and this book does a perfect job of describing the beauty that is hidden within. A beauty that isn't really appreciated in the world we live in. It's poignant, beautifully written and full of depth and an extraordinary sense of wisdom that isn't usually found in books of this particular genre. Which is why I immensely enjoyed it and actually cried through some very touching parts of it. I fell in love with its perfectly imperfect characters, that might be flawed and broken - both on the outside and on the inside - but their inner beauty and grace shine through.

Fern is both vulnerable and strong, which sets her apart from most female heroines. It's difficult for her to recognize her worth and that is what makes her relatable. We've all experienced this ugly feeling of unworthiness at some point in our lives. She hides this silent strength inside her that is screaming to get out and it feels like she's carrying the weight of the world on her shoulders. She's loyal, smart and genuine! She's also desperate to be seen by Ambrose, the boy she's been in love with since her childhood.

Ambrose is a tortured soul who is trying to get away from his demons by avoiding everyone who might love him. His need to escape leads him to join the military and he's deployed to the war shortly after. The experience leaves him traumatized and scars his beautiful face so badly that, he feels like he has to hide from everyone who knew him and what he used to look like.

Bailey, Ferns' cousin, was probably my favorite character in this novel! He suffers from muscular dystrophy, but doesn't let him define him. On the contrary, he lives life to the fullest and is ready to take over the world! His character overshadowed his physical shortcomings by far and that is the reason I fell in love with him. Ambrose was his inspiration and Bailey wanted to be a hero, just like him. I admired his inner strength and determination, to the point where I started to wonder a lot about myself and what I'm actually capable of.

Fern and Amrose's love story reached another level of intimacy, in the sense that it was completely different from what we're used to reading. It went so much deeper than physical beauty and was motivated by this inner strength that, not a lot of people embrace. Their relationship wasn't an easy one, by any means and it progressed throughout the book in the best way possible! That's what made it so unique!

The writing was phenomenal and original, almost lyrical I would say. The author managed to create a raw and poignant story that needed to be told. A story necessary for us, even if we weren't really aware of it before we started reading Making Faces. Amy Harmon made me cry tears of sadness, joy and hope, something that not a lot of authors have managed to do. But, let's not forget that words are powerful, if we use them in the right way. I get a bit teary eyed even now, thinking back to the plot and the impact it had on me as a person. I cried for Fern and the fact that she felt unworthy and insignificant because of her appearance. I cried for Ambrose and everything he lost. And of course, I cried for Bailey who was desperate to be seen as a hero and lived life the way it should be lived. He didn't realize that, he was a hero from the very beginning, until the very end!

Making Faces is definitely a book that you need to read, if you haven't done so already! It will move you, make you cry and start to question your very existence! And remember that, true beauty is hidden within and a soul's ugliness cannot be concealed by wealth or appearance...