A mermaid has no fear of the deep… 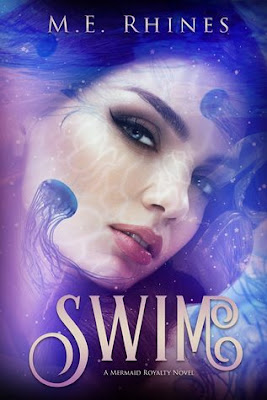 Angelique is not your typical fairy tale mermaid. She’s edgy, with a quick temper and intense personality that sometimes leave her feeling like an outsider even among her own clan. Reeling from the recent changes in the Mer-world hierarchy, Angelique is struggling to find her place in the ocean. But a chance encounter with a handsome two-legged Fin-man will leave her questioning more than just her place in the underwater order.

Packed with adventure, romance and drama, Swim continues the compelling story of life and love in the magical underwater realm of Atargatis.

He rubbed the back of his neck, seeming unsure. “Wow. All right. So, you’ve never been kissed. I wish I’d known that.”

I inclined my head, pondering the implication of the statement. Of course, now that he knew my kind only kissed those we felt destined to be with, he would think I expected a commitment. Judging by the way he stammered and kicked at the ground, the thought didn’t sit well with him.

If he thought I was about to make a fool of myself— grovel and beg him to stay with me—he had another thing coming. Lennox could swim away right now and never come back for all I cared. I’d figure out a way home. I begged no one, least of all a dagger-slinging Fin-man with red hair and bloodthirsty tendencies… No matter how muscular or good-looking he was. 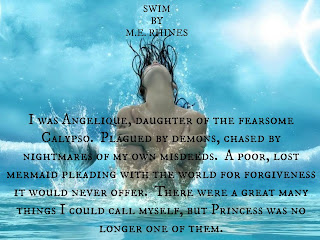 He laughed, heartfelt and genuine, before drawing me in again.

Lennox shook his head, then slipped a finger under my chin, tilting my head back to look at him. “Believe me, Angelique, I never thought there was. You’re the most independent, self-sufficient mermaid I’ve ever met.”

I blinked at him, speechless over his affection for what I had been taught were my most annoying traits.

“All I meant,” he continued, “was if I had known it was your first kiss, I would’ve brought my A-game. You surprised me. I wasn’t ready.”

A tingle of anticipation danced up my spine. As incredible as our kiss was, I couldn’t imagine it
being any better. My heart fluttered and I held my breath as Lennox lowered his chin, stopping just before his lips touched mine. 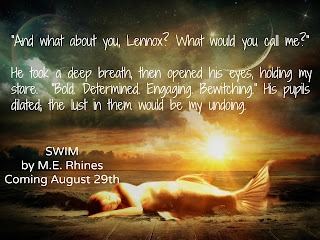 “Let me show you a proper kiss,” he said, his voice gruff and masculine. The deep baritone rumbled in my chest, and my stomach clenched as the his lips pressed into mine.

This time, his movements were slow and deliberate. Expert and guiding, his mouth engaged mine, turning my brain and muscles to mush. Giving in to him was against my makeup entirely. Yet, somehow, he managed to convince me to do it without even saying a word.

As much as I hated to admit it, a part of me understood that as long as Lennox was around, I would never be in complete control. 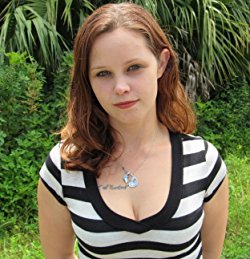 M.E. Rhines a southwest Florida native currently living in North Port with her two beautiful children and a third, much larger child whom she affectionately calls husband.


She writes young adult paranormal romance to feed her belief that fairy tales are real and
nonsense is necessary.