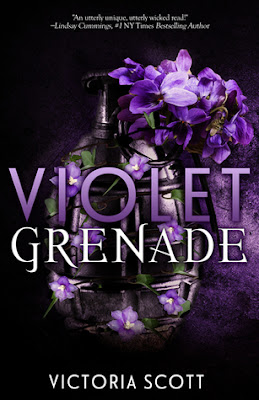 Domino: A runaway with blood on her hands.

Cain: A silent boy about to explode.

Wilson: The one who will destroy them all.

When Madam Karina discovers Domino in an alleyway, she offers her a position at her girls’ home in secluded West Texas. With no alternatives and an agenda of her own, Domino accepts. It isn’t long before she is fighting her way up the ranks to gain the madam’s approval…and falling for Cain, the mysterious boy living in the basement.

But the madam has horrible secrets. So do the girls in the house. So does Cain.

Escaping is harder than Domino expects, though, because the madam doesn’t like to lose inventory. But then, Madam Karina doesn’t know about the danger living inside Domino’s mind.

First of all, I never thought that I would ever come across a book this chaotic and unpredictable. Those are the first words that immediately come to mind when I think about Violet Grenade. Going in, I was so surprised by the twists and turns that took up the majority of the book that, I could not wait for more! Victoria Scott is an author I've read in the past and I sincerely think that, this is one of her best works, if not the very best. The beginning can't even begin to prepare you for what's coming next! It's madness I tell you! This is a weird kind of book so, don't expect ordinary characters and a normal plot that develops like you'd expect. With that being said, expect the unexpected and don't be afraid to embrace it. We usually tend to not enjoy plots and concepts that are out of our comfort zones, even though we try to deny it most of the time. Not because they weren't enjoyable but because we couldn't let ourselves give them an honest and unprejudiced try. This is one of those books. It's super unique and different from anything that I've personally read before so, I would recommend going into it with an open mind and without having any expectations where the plot and its characters are concerned!Moving on to the characters...They're definitely as unique as the book itself! And of course, quite unusual. Domino is a tortured soul who's looking for a glimpse of light in a life that is filled with darkness. She's a very flawed character but that just makes you love her and her flaws even more! As a reader, you'll definitely be drawn to her and the mystery surrounding her. And the secrets that she hides will make your eyes pop out and your brain explode from trying to figure everything out!
The rest of the characters were as impressive as the main character! Karina was a very manipulative and well written character! She runs her house with an iron fist and does not allow disobedience. Cain was also an amazing character that I couldn't wait to get to know more after each chapter! He was a wonderful surprise and the perfect addition to the story and how it progressed!More importantly, Victoria Scott did an amazing job at creating these complex characters and giving them depth and dimension. The story itself was beautifully written and the world building was more than impressive! It was dark, thrilling and full of twists and turns that had me completely hooked. I couldn't turn the pages fast enough and I'm pretty sure you'll say the same as soon as you get your hands on this book! Also, the development of the plot and the characters was more than I was expecting, more than I could've ever dreamed of! Overall, Violet Grenade was one of the best roller coaster rides I've ever been on! It took me on an exciting journey that never stopped being unpredictable! It's so intense and addicting that you won't be able to put it down until you've reached the ending. And then, you'll be wishing for more. Desperately! 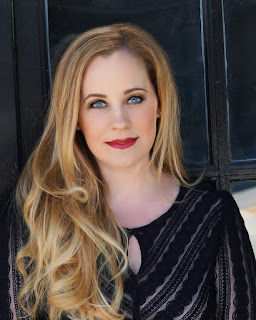 Victoria Scott is the acclaimed author of eight novels for young adults including FIRE & FLOOD, THE COLLECTOR, and VIOLET GRENADE. She is published by Scholastic and Entangled Teen, and is represented by Sara Crowe. Victoria’s novels are sold in fourteen countries, and she loves receiving reader emails from at home, and across the world.