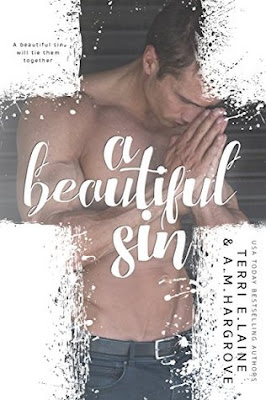 *From USA Today Bestselling Authors, A.M. Hargrove and Terri E. Laine, comes a standalone, Forbidden Love Story. Since I was a boy, my desire was to marry the church. To give my vows and life over to God despite the corruption in my soul. I am a sinner, the embodiment of temptation, or so I’ve been told. Yet, I’ve never touched, never kissed, never sought the company of another until her. She is my weakness, my salvation, my downfall and my freedom. Our sins are bound tighter than fate. My name is Canaan. I am an ordained Roman Catholic priest, forever and always. Her name is Haven. She may be my destiny, my destruction. This is not a love story, but rather a confession of all my sins. *Warning – A Beautiful Sin is a forbidden romance that blurs the lines between passion and religious faith. Please be warned, the subject matter may be offensive to some readers.

*I received this book from the publisher in exchange for an honest review. All thoughts and opinions are my own!.*


Beautiful Sin follows the lives of Canaan and Have, two very tormented people whose paths intertwine in a very unexpected way. They're both trying to look fine on the outside, while the demons from their pasts invade their present and won't let them live in peace. It's easier to put on a happy smile in front of the world in order to hide your suffering.

First of all, Canaan and Haven's story was very moving and different from what I usually choose to read. Their taboo love story is what initially drew me in and the events that followed definitely made it more interesting than I could've hoped for. I'm all about forbidden romances and this one definitely made the cut. It was a bit difficult for me to get through the beginning because I really did not know whether I was into the story or not. I'm very glad that I kept on reading though because after a couple of chapters, I started to enjoy it.

Second of all, what I think I enjoyed the most was the authors' writing. I immensely enjoyed the writing style of this book and it really managed to intrigue me. The plot itself had a little bit of everything - drama, angst, forbidden romance - which I think a lot of people will find satisfying if they decide to give this book a chance. The characters themselves were very likable and what they went through broke my heart. They didn't get together until after some time and the circumstances weren't the most conventional but, in the end, they got their happily ever after!

The story was told in both their POVs which is something that I personally prefer and enjoy more. The character development was also very impressive, mostly where Canaan is concerned because by the end of the book, he was like a completely different person. Truth be told though, I wasn't blown away by their show of affection for each other. Or how their love story/relationship progressed. I feel like it was a bit underdeveloped or just not passionate enough for my taste. Especially considering how much they sacrificed to be together. Everything happened so quickly but didn't have the intensity that a hopeless romantic like me would expect in situations like these.

Lastly, I really was expecting some kind of plot twist during the ending. Or at least something that wouldn't make it feel so rushed. There were some aspects that were being repeated while, some other ones that I would've liked to see more of kind of faded in the background. Long story short, I would've liked it a lot better if certain topics were a bit more detailed and progressed way further than they initially did in the book.

Overall, it's a beautifully written and unique story, full of heartbreak and challenges that will definitely move you. Beautiful Sin wasn't my favorite but it is definitely a very enjoyable read and I would recommend it for fans of forbidden love and drama!

Hope you found this review helpful!