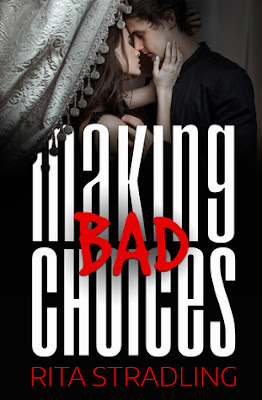 Culter Fuller came back into my life on the day my mother died, as if losing my mother wasn't bad enough.

We hated each other since childhood. Well, I hated him. He had a very different story.

When I moved to my dad's house to finish my last semester of high school, we went from bitter enemies to. . . something else. He was suddenly everywhere, occupying my space, determined to pull me into his life, filling me with thoughts I knew were wrong.

I knew that soon we would cross a line that should never be crossed.

But, I was always very bad at making the right choices.

*I received a free copy of the book in exchange for an honest review. All thoughts and opinions are my own*Making Bad Choices follows the story of Cassie and Culter. Cassie moves to live with her dad, after her mom loses a very long and painful battle with cancer. There, she is reunited with her stepbrother Culter, who she hates. She is very surprised though, when Culter's behavior is nothing like the one she expected. Instead of being mean and bitter towards her, he treats her better than anyone and she starts having doubts about the nature of their relationship. When romantic feelings she tried very hard to suppress arise, she doesn't know how to handle them. Does she forget about Culter and what he makes her feel, or does she give in to the temptation of falling in love with her stepbrother and pursuing a relationship that will more than likely disrupt the peace of their family?I have to admit that, going into this, I was a bit hesitant about whether I would find the topic it dealt with enjoyable. It has everything to do with forbidden love and the effects it will-undoubtedly- have for everyone involved. What really drew me though, is the fact that, it wasn't written in a depressing manner. Granted, the situation was complicated but in a way that drew you in and made you want to keep reading. The writing itself was very impressive and made the book so much easier to read. Everything was carefully and thoroughly explained which I loved because usually, that is my main problem with NA novels. I also appreciated the big role family itself played in this book. The interactions between the characters were very realistic and showed that, every family is dysfunctional in its own way. Cassie and Culter, as well as the rest of the characters were very likable and easy to connect to. They all had their struggles which made it even easier to connect with them and relate to everything they went through. Cassie went through so much and had to grow up a lot quicker than others because of her mother's condition. Nevertheless, she was a very positive person and wouldn't let anything or anyone, get her down. She is very mature for her age because of the circumstances, she sincerely cares for those close to her and will do anything in order to make them happy. At the beginning, she is very hesitant to pursue a relationship with her stepbrother, which is something to be expected since, the consequences might vary. It also isn't something that everyone - especially their parents - will accept.Culter was also a very interesting character. His actions towards Cassie impressed me and I have to admit that, I swooned during some of their moments together. He was very patient, understanding and he didn't hesitate to show her - with words and actions - how much he loved her. His relationship with her father isn't the best but, I feel like he was also a very mature character for his age and knew how to go after what he wanted, without giving up. He wasn't fazed at all by other peoples' opinions and wanted to make his relationship with Cassie official, as soon as he could. Overall, Making Bad Choices was a very entertaining and enjoyable read! The relationships between the characters were very refreshing and uncomplicated. There is the unavoidable high school and teenage conflict setting but, there are also some very interesting and unpredictable plot twists that I personally did not see coming.

It was such a swoon worthy and slow burning romance that excited me more than I anticipated. Definitely recommend it, whether you're a fan of NA or not.