All the Truth That's In Me By Julie Berry {Review}

Title: All the Truth That's In Me 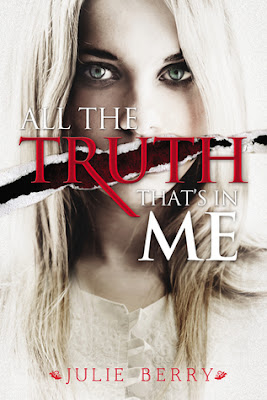 Four years ago, Judith and her best friend disappeared from their small town of Roswell Station. Two years ago, only Judith returned, permanently mutilated, reviled and ignored by those who were once her friends and family.

Unable to speak, Judith lives like a ghost in her own home, silently pouring out her thoughts to the boy who’s owned her heart as long as she can remember—even if he doesn’t know it—her childhood friend, Lucas.

But when Roswell Station is attacked, long-buried secrets come to light, and Judith is forced to choose: continue to live in silence, or recover her voice, even if it means changing her world, and the lives around her, forever.

This startlingly original novel will shock and disturb you; it will fill you with Judith’s passion and longing; and its mysteries will keep you feverishly turning the pages until the very last.

I've had my eye on this book for a while and truth be told, I was immensely disappointed. I don't want to sound harsh, but because it's been a while since I've disliked a book so much, I'm going to be completely honest here. No offense of course, to anyone who has read and enjoyed this book!

First of all, the narrative was interesting enough, but something about it bugged me. A lot! I couldn't concentrate on the story and it took me almost a week to finish this book. There were so many slow parts that, by the end of the book I seriously lost count. I literally forced my self to finish the book because I wanted to form a complete opinion on the matter. I also kept telling myself that it might get better, but it didn't.

On a more positive note, the plot was fascinating but unfortunately, it wasn't able to overshadow everything else that was going on with this book. Or should I say, wasn't going on. As you have probably figured out by now, I wasn't a big fan of the writing style and I felt like there were some major plot holes that I couldn't, for the life of me, let go. In other words, I found it lacking in a lot of things. Another one being that I didn't like the characters. At all! I tried so so hard to connect with them and sympathize but, I just couldn't.

Second and maybe most important of all, I couldn't understand what was happening half the time. It jumped from one thing to the next without really explaining the transition, if I must call it something and the whole thing just felt rushed. Maybe that was the intention of the author but still. It wasn't enjoyable.

To conclude this, not so positive review, I have to say that as a reader, I expected more from a book that has such a meaningful and full of depth synopsis. Everything is not what it seems after all. It had a pretty interesting foundation as a story and I feel like, if it had been handled differently, it would have been so much better. What I mean by that you might be wondering. If the flow was smoother and the author did a better job at explaining the story and transitioning from one thing to the next without being confusing and disorienting, then All the Truth That's In Me would have been a great read!