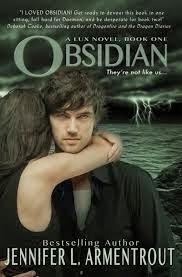 When we moved to West Virginia right before my senior year, I'd pretty much resigned myself to thick accents, dodgy internet access, and a whole lot of boring.... until I spotted my hot neighbor, with his looming height and eerie green eyes. Things were looking up.

And then he opened his mouth.

Daemon is infuriating. Arrogant. Stab-worthy. We do not get along. At all. But when a stranger attacks me and Daemon literally freezes time with a wave of his hand, well, something...unexpected happens.

The hot alien living next door marks me.

You heard me. Alien. Turns out Daemon and his sister have a galaxy of enemies wanting to steal their abilities, and Daemon's touch has me lit up like the Vegas Strip. The only way I'm getting out of this alive is by sticking close to Daemon until my alien mojo fades.

If I don't kill him first, that is.


I've been meaning to pick up Obsidian for a really long time but I was afraid that I wouldn't like since many people compared it to Twilight.For me,listening to what other people say isn't something that happens often but this time...I'll just say that I'm not a big fan of Twilight.And that's my main reason for not picking up the book.
I'll begin by saying that I enjoyed Obsidian more than I thought I would.It was really refreshing and unique and I was blown away by everything that happened.I fell in love with the world the author created and the characters were just amazing.I connected with them from the beginning and Katy was a wonderful main character!She was extremely brave and caring and I really admired her for that.She was willing to sacrifice herself for people she didn't know that well and she almost died in the process.

Moving on to Daemon who I love to hate.Or hate to love.Anyway...he was perfect outside but his behavior and attitude weren't impressive or admirable...I hated the way he treated Katy.Yes I could understand that he cared about his sister but that didn't give him the right to hurt other people.But there were times where the real Daemon came out and I loved that side of him.He was such a complicated and confusing character.I loved his tender moments with Katy and I hope I'll see that self more on the next book.And yes...I loved him.His behavior made me angry and I was really frustrated with him most of the time but...I still love him and think he and Katy would make the perfect couple!

Let's move on to the other characters.Dee,Daemon's sister was of course my favorite and I loved her relationship with Katy.Their bond was real and even Daemon couldn't keep them apart.I also enjoyed the scenes with the "human" girls,Lesa and Carissa.But I hated Ash and her brothers.Especially Ash.If I were Katy,I would kick her ass and get it over with.Seriously...I was ready to get inside the book and punch her or something.Of course she would have defeated me with her alien powers but who cares?

The writing was phenomenal and it really drew me in.The plot was really clever and different from all the other books I've read before.Really unique and the world the author created was really impressive and believable.There was also the fact that Katy loved blogging.That made it even more realistic...The story was fast paced and I couldn't stop reading.I really enjoyed it and I have to admit that it was really refreshing.Something different from everything else I've read these past few months.It had me excited and eager to see what would happen next.

Overall,Obsidian is a book I immensely enjoyed and I think the next books will be even better.It was fast paced,captivating,action packed,with a kick ass heroine,a hot,dark,mysterious bad boy and of course...aliens!Highly recommend it...