If You Find Me By Emily Murdoch {REVIEW} 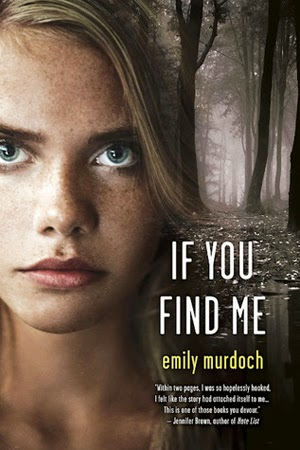 There are some things you can’t leave behind…

A broken-down camper hidden deep in a national forest is the only home fifteen year-old Carey can remember. The trees keep guard over her threadbare existence, with the one bright spot being Carey’s younger sister, Jenessa, who depends on Carey for her very survival. All they have is each other, as their mentally ill mother comes and goes with greater frequency. Until that one fateful day their mother disappears for good, and two strangers arrive. Suddenly, the girls are taken from the woods and thrust into a bright and perplexing new world of high school, clothes and boys.

Now, Carey must face the truth of why her mother abducted her ten years ago, while haunted by a past that won’t let her go… a dark past that hides many a secret, including the reason Jenessa hasn’t spoken a word in over a year. Carey knows she must keep her sister close, and her secrets even closer, or risk watching her new life come crashing down.


This is the story of Carey and her sister Jenessa,who live in the woods with their drug addicted mother.When she disappears,the two girls are left to fend for themselves.But when two strangers find them and take them away from the woods,Carey is thrust into a new and complicated world she has to get used to, which isn't easy.And it's even more difficult for Carey to hide a secret that affected both her and Nessa.Jenessa hasn't spoken a word in over a year and Carey is haunted by a dark past that won't let her go.She can't talk to anybody about it and risk losing her new family and new life.Because what happens in the woods...stays in the woods.

I've been wanting to read this book for a really long time but as always...I kept putting it off.And I saw a couple of booktubers talk about it recently so I knew that it was time for me to finally pick it up.And I loved it.The plot was so unique and I was hooked from the first chapters.

From the beginning the main character Carey is talking about something that happened in the woods.A white star night that changed both hers and her sister's life.But you don't learn what happened that night.Which was so frustrating and made me assume many things.But the truth was even worse.It was heartbreaking,unpredictable and made me wanna punch their mother in the face.I think everyone will assume things that might be truth while reading If You Find me but the real truth will be so devastating and unexpected.And some parts of that truth made me cry if not all.I get upset just by thinking about it.

This is a sad and dark story.Such a stunning and intriguing debut that shows the cruelty of the world we live in.Don't get me wrong.The world isn't cruel...Some people who live in it make it that way.That's exactly the case in this book.These two characters lived in awful circumstances for so many years.They don't know how it feels to have other people care for you and love you.The only had each other and their bond,even after they left the woods was so real and admirable.

While reading If You Find Me I was a roller coaster of emotions.Felt so many things and I think Carey's feelings and thoughts really affected me.She is one of the strongest and caring characters I've ever read about in a book and I think it's worth reading this book,just for the sake of meeting her through it.It wasn't a long journey unfortunately and Carey isn't real but she could be.She could be anyone in this big world we live in.And words cannot express how much I loved her as a character.And of course I fell in love with Nessa.

This was such an honest and captivating book which managed to capture the main character's pain.It was a heartbreaking read which I enjoyed immensely.Who am I kidding?I fell in love with it.I might be exaggerating but it truly affected me as a person and not a lot of books can do that.And don't forget that this is a debut.Which is more than impressive.