Book Blitz-Come As You Are By Theresa Weir + Excerpt 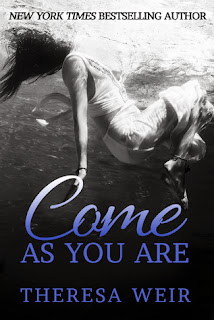 New Adult Romance by RITA winner and New York Times author Theresa WeirMolly Young has a secret. To keep it she holds the world at a distance. Behind her lies a trail of dumped boyfriends who came too close to discovering what no one can know. When her estranged father dies of an unexpected heart attack he leaves an even deeper secret, one tied to Molly’s.At the funeral repast Molly is unable to tolerate the shoulder-to-shoulder mourners and runs out the door and down the street to the nearest bar. Come dawn, with no memory of the past ten hours, she finds herself in bed with a beautiful stranger. She slips away before he wakes up, unaware of the role he’s about to play in her life. Is he the one guy who can convince Molly to face her painful secret and become the person she’s meant to be?

A shaft of sunlight cut through dark drapes and fell across my face, drilling into my retina. I groaned and slung an arm across my eyes, trying to make the sun stop it.
The bed dipped, and an arm around my waist tightened. That's when I became aware of a soft breath against the back of my neck, and a solid body curved against my side, a leg across my leg.
What the hell?
I uncovered my face and unsquinted my eyes. Dark hotel room. Dark except for that sliver of light. And a body in bed next to me. I held my breath, listening, waiting to see if the person moved or made any indication that he knew I was awake. And I say he because there was no mistaking the body part that was pressed against my hip. I guess I was now somebody's wet dream. But whose?
My thoughts raced backward as I tried to piece together last night. I remembered the funeral. And I remembered all the strangers in our house. My house, not ours. Just me now. And I remembered the lawyer saying I should meet him today. And I remembered running.
A bar.
I ended up at a bar.
I've never blacked out in my life, but I had no memory of anything past those first few drinks. Had somebody slipped me something? Or had I just drunk myself into oblivion?
Through this entire rewind, the stranger in bed had kept up a steady, light breathing with an occasional contraction of the arm that held me.
I turned my head and saw a clock. Early. 6:00 a.m. Slowly, carefully, holding my breath once again, I inched away from the body. His arm tightened, but then he let out a sigh and rolled to his back, releasing me completely.
I slipped from the bed, sliding out from under the white sheet that covered us both until I stood barefoot on the carpet to stare at the man I'd spent the night with. And apparently had sex with, because there were my panties on the floor. I picked them up with curled toes, then slipped them on under my dress as I watched the guy in the bed. Then I found my boots and stuffed my feet inside, not bothering to lace them.
No memory of him. None. Nothing. And really, he was the kind of guy a girl would remember.
Where do I start?
A beautiful boy man. Probably a few years older than me. Not that muscular. Not like somebody who lifted weights, but he was toned. More like a swimmer's body, with that kind of smooth skin that felt like satin. Nipples and an almost invisible line of hair that ran from his navel to the sheet that covered the rest of his body. The hair on his head was dark and curly, tousled over his forehead and ears. He wasn't tan. Not like somebody who was outside a lot, but he wasn't really pale either.
Strange that it was so hard to tell much about a person with no clothes. Clothes gave you clues.
Tossed on a chair was a pair of jeans, a worn leather belt that looked like he'd owned it for years, and a vintage plaid shirt.
Was he a hipster? Part of the local music scene? A student? No, a student wouldn't have a hotel room. Unless maybe he got the room for us. Yeah, that might be. Maybe he lived with a bunch of guys and he'd wanted some privacy.
Admiration time over, I slipped from the room and took the elevator to the first floor. It wasn't until I stepped outside that I realized where I was. At a hotel on the West Bank just across the river from the university, a couple of miles from my father's house.
The shock of waking up in a strange room with a strange guy had momentarily separated me from the misery of my headache, churning stomach, and the general feeling of wanting to die. But now that I was on the street, and now that exhaust fumes combined with the smell of rotten food coming from a Dumpster hit me, my stomach took a dive and my head split in two.
I had no money.
I had no credit card.
I wanted nothing more than to drop down on the curb and bury my face in my hands, but I also wanted to put some distance between me and the guy upstairs. What if he woke up? What if he was already awake? What if he came after me?
Why would he do that?
He wouldn't come after me. He'd be glad I was gone.


Later, when Molly runs into the mysterious guy again…


"I have your cell phone," he said.
I stopped mid-flight.
There it was, my iPhone in its pale blue case, looking weird in his hand. Long fingers. The vintage shirt. Shaggy hair that curled around his ears and over his forehead. He hadn't shaved. He needed to shave. What color were his eyes? Green? Hard to tell in this light.
I snatched the phone from his hand.
Before I could spin away he said, "Be sure to check the photos. I think you'll find some interesting ones." He smiled. The kind of smile I've used when someone I hate steps in a pile of shit.
"Fuck you."
"You've already done that." 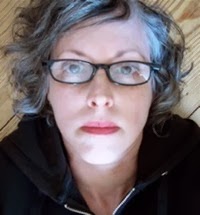 Theresa Weir (a.k.a. Anne Frasier) is an award-winning NEW YORK TIMES AND USA TODAY BESTSELLING AUTHOR of twenty-three books and numerous short stories that have spanned the genres of suspense, mystery, thriller, romantic suspense, paranormal, and memoir. Her titles have been printed in both hardcover and paperback and translated into twenty languages. Her memoir, The Orchard, was a 2011 Oprah Magazine Fall Pick, Number Two on the Indie Next list, a featured B+ review in Entertainment Weekly, and a Librarians’ Best Books of 2011. Going back to 1988, Weir’s debut title was the cult phenomenon AMAZON LILY, initially published by Pocket Books and later reissued by Bantam Books. Writing as Theresa Weir she won a RITA for romantic suspense (COOL SHADE), and a year later the Daphne du Maurier for paranormal romance (BAD KARMA). In her more recent Anne Frasier career, her thriller and suspense titles hit the USA Today list (HUSH, SLEEP TIGHT, PLAY DEAD) and were featured in Mystery Guild, Literary Guild, and Book of the Month Club. HUSH was both a RITA and Daphne du Maurier finalist. Well-known in the mystery community, she served as hardcover judge for the Thriller presented by International Thriller Writers, and was guest of honor at the Diversicon 16 mystery/science fiction conference held in Minneapolis in 2008. Frasier books have received high praise from print publications such as Publishers Weekly, Minneapolis Star Tribune, and Crimespree, as well as online praise from Spinetingler, Book Loons, Armchair Interviews, Sarah Weinman’s Confessions of an Idiosyncratic Mind, and Ali Karim’s Shots Magazine. Her books have featured cover quotes from Lisa Gardner, Jane Ann Krentz, Linda Howard, Kay Hooper, and J.A. Konrath. Her short stories and poetry can be found in DISCOUNT NOIR, ONCE UPON A CRIME, and THE LINEUP, POEMS ON CRIME. She is a member of Sisters in Crime and International Thriller Writers.