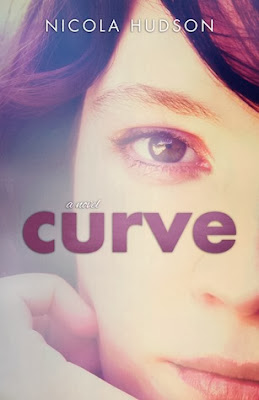 Appropriate for readers over 15 due to sensitive themes (sexual violence), language and sexual content.                                                  Cass is seventeen and never been kissed, let alone touched.  On one humiliating night, that changes when two boys become interested in her.  Flynn is the older brother of her best friend, yet Cass has never considered him as anything other than that.  Rob is the school sports star and becomes obsessed with Cass when he loses a bet because of her.


As the relationship between Cass and Flynn develops, Rob's interest becomes increasingly malevolent.  One terrible night changes Cass's life and threatens to destroy her relationship with Flynn, as well as her future.

Curve was such a great NA book.It was so easy to connect with the characters and relate to them.I think everybody goes through a phase in their lives where the feel insecure about themselves and how they look.Cass story was believable and a bit heartbreaking.She's an insecure teenager whose self esteem is crumbling because of some things that happened.Shows how cruel some people are.I also think that the author managed to put into a book what teenagers feel in real life.

I really liked Cass as a character.Her relationship with her best friend Neve was so real.I loved that they always had each other's backs and cared so much for each other.And of course I loved Flynn.He was such a sweetheart and even though he was a bit overprotective,it was obvious that he truly cared.Completely understandable.The book deals with some very dark issues that I'm not gonna talk about in case I spoil anyone.That's why I said that people are so cruel nowadays.But I think the author handles it extremely well.

Last thing I want to talk about is Cass's feelings when it came to her relationship with Flynn.I loved them as a couple,however the fact that Cass takes responsibility for things that aren't her fault and apologizes for everything is a bit uncomfortable and something that I don't personally like when it comes to relationships.I know many girls feel insecure and that's why the book is so realistic.I guess that,the only way to understand what Cass is going through,is to of course get in her head and see things her way which is kinda impossible.

To sum it all up,I'd recommend Curve to fans of NA novels.It's something really different that basically talks about reality and what some people go through.I can't wait to read the next book which is going to be about Neve.I loved her as a secondary characters and I can't wait to find out what will happen once she goes to college!

I’ve always been an avid reader and occasional writer, but only ever for my own eyes!  Then, last year, I read my first New Adult novel - and I was hooked.  After consuming a vast e-pile of NA, the burning need to write my own was overwhelming.  And so I started…Fitting in writing around a demanding job and a wonderfully supportive husband has been, umm, interesting at times but the whole process has been a fantastic experience.  I have been blown away by the friendliness and support shown by the readers, writers and bloggers who make up the NA and Indie communities; online with them is one of my favourite places to hang out!I have already started the follow-up novel to Curve, Heart, which follows Neve as she starts at university.