Destroy Me By Tahereh Mafi {REVIEW} 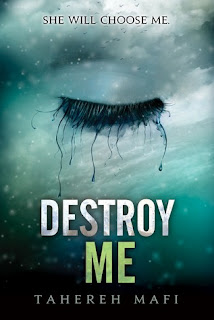 Perfect for the fans of Shatter Me who are desperately awaiting the release of Unravel Me, this novella-length digital original will bridge the gap between these two novels from the perspective of the villain we all love to hate, Warner, the ruthless leader of Sector 45.

In Tahereh Mafi’s Shatter Me, Juliette escaped from The Reestablishment by seducing Warner—and then putting a bullet in his shoulder. But as she’ll learn in Destroy Me, Warner is not that easy to get rid of. . .

Back at the base and recovering from his near-fatal wound, Warner must do everything in his power to keep his soldiers in check and suppress any mention of a rebellion in the sector. Still as obsessed with Juliette as ever, his first priority is to find her, bring her back, and dispose of Adam and Kenji, the two traitors who helped her escape. But when Warner’s father, The Supreme Commander of The Reestablishment, arrives to correct his son’s mistakes, it’s clear that he has much different plans for Juliette. Plans Warner simply cannot allow.


Destroy me is a Shatter Me novella which left me really satisfied.I never bother reading novellas but there's a first time for everything.I loved Shatter Me and unfortunately,I've yet to pick up Unravel Me ,so I just decided to pick up the in between if that makes any sense.I really enjoyed looking at everything from Warner's perspective and even. though I kinda hated him when I read Shutter Me....now I love Warner and I kinda want him to end up with Juliette.I don' t know what happened but after reading Destroy Me,I love Warner.And I think that I might prefer him to be with Juliette because truth be told...Adam doesn't seem that appealing any more.

Anyway,the thing I liked most was the fact that the author revealed some of the things Juliette wrote on her journal and seriously?By reading those pages you realize how perfect Tahereh Mafi's writing is.I just love her writing so damn much.It's really unique and different and...I love it.There is also the fact that Warner isn't the heartless bastard everyone thinks he is.He isn't that in control when he's alone and he despises his father.I would've despised him for sure if he was my father.And he actually killed that man in Shatter Me because he was abusing his family.And tell me now...who would've done that.He's more sensitive and caring than people think.Maybe those aren't the exact words but I can't find anything else right now to explain his behavior in Destroy Me.

Usually,I don't bother reading novellas.I don't know why but I never found it necessary.But I'm gonna try and get more novellas when I feel like it because you can actually learn something more if you read them.So I don't think it's necessary to read Destroy Me...I mean it doesn't have anything in my opinion that is really important when it comes to what will happen next but I think this is a novella worth reading.